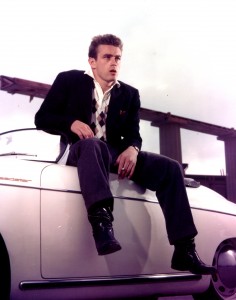 1. His enduring fame and popularity rests on only three films, the most famous being the classic Rebel Without a Cause. He died aged 24.

2. He was the first actor to receive a posthumous Academy Award nomination for Best Actor and remains the only person to have two such nominations posthumously.

3. He was very close to his mother; she was “the only person capable of understanding him.”

4. He was addicted to cars going through over 5 a year. His favourite 550 Porsche was customized by the young George Barris, (who would go on to the design of the Batmobile) and was given the nickname “Little Bastard”. It was to kill him!

5. His last known words, uttered right before impact, were said to have been “That guy’s gotta stop… He’ll see us.”

6. The sculpture on his headstone is inscribed with “what is essential is invisible to the eye” on of Dean’s favourite lines from Antoine de Saint-Exupery’s The Little Prince.

7. His sexuality has always been under question especially after tales of his affairs with both men and women. William Bast his best friend finally revealed, after several years of dodging the question that they had indeed been lovers!

8. He was reported to have been a fan of the casting couch after his friendship with Rogers Brackett, the influential producer of radio dramas who encouraged Dean in his career and provided him with useful professional contacts.

9. He registered as a homosexual, then classified by the US government as a mental disorder. When questioned about his orientation, he is reported to have said, “Well, I’m certainly not going through life with one hand tied behind my back.”

10. It has been reported that his knick-name in some circles was ‘the ashtray’ for a bizarre fetish he was said to have had regarding stubbing out lighted cigarettes.