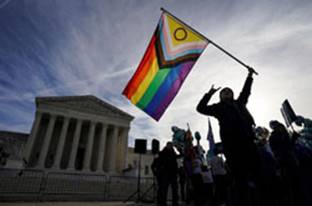 From our friends at PinkUK by Simon Willian

You may have heard a lot of noise about abortion rights in the United States over the last few months.

OK, it’s a serious and topical issue, but you may wonder what, if anything, it has to do with LGBTQ+ rights, including same-sex marriage, and why we are talking about it on Bent.com…?

The quick answer is: yes, it does link directly to LGBTQ+ people’s rights.

Here’s why: in June 2022 the US Supreme Court announced that it had over-ruled a previous decision it made almost half a century ago, in 1973, that a woman could access safe and legal clinics for abortion within limits of pregnancy.

The change meant that many women seeking safe and legal interventions who live in states where abortion was illegal instantly needed to travel long distances to ‘pro-choice’ states where they could access safe medical services or seek unsafe and illegal solutions.

This legal decision was made possible because of a more conservative court, with new judges having been appointed by the former US President Donald Trump during his term of office. This means the Supreme Court is now generally stacked against more ‘liberal’ interpretations of the US Constitution and the risk is that the same legal approach played out with abortion rights may be applied to same-sex marriage by these same judges.

Same-sex marriage was legalised across all fifty US states, in a similar way, by judge-made law in 2015 in a case called Obergefell v Hodges, opening up same-sex marriage to all people in the United States.

So in December 2022 Congress, the US equivalent of the UK Parliament, passed a ‘compromise law’ called the Respect for Marriage Act (RFMA), signed into law by US President Joe Biden on 13 December 2022. Our friends at PinkUk explain what all this means., what’s good and what’s not so good about it from a same-sex marriage point of view. Note what happens in the US often affects other countries.