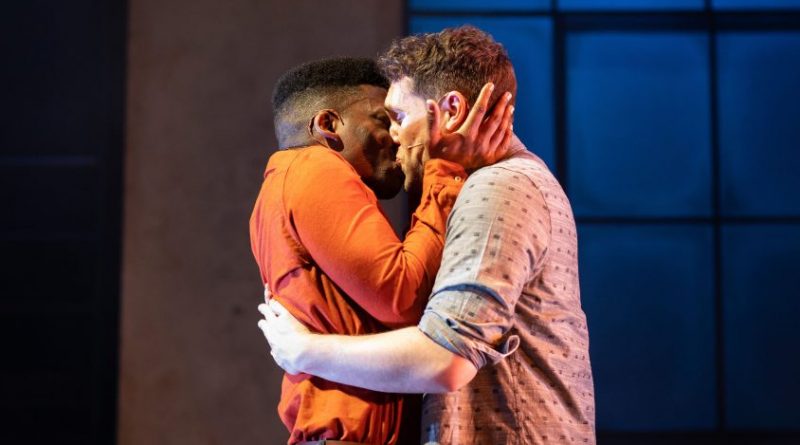 Gay marriage lays bare family and societal tensions! Bent’s Adrian Gillan is moved by play-with-songs-and-movement, Leave to Remain, at the Lyric Hammersmith in London, until 16 Feb 2019!

Boldly experimental and boasting credibly complex characters and relationships that are both funny and moving: do not miss out on this all-too-short run at the Lyric Hammersmith of Leave to Remain – a modern love story, written by Matt Jones and Bloc Party’s Kele Okereke, with new music by the latter.

No, this is not a piece about Brexit; but rather the tale of a young gay couple suddenly faced with an uncertain future. British-of-Nigerian-heritage Obi and American Alex meet, fall in love and – when Alex’s work relocates (incidentally, due to Brexit) and his visa goes with it – decide they must get married in haste, so they can be together; in the process of so doing, quickly learning some uncomfortable truths about each other, and about their contrasting pasts and families.

Directed and choreographed by Robby Graham, the action smoothly unfolds through a wonderfully naturally fluid and seamlessly innovative blend of music, drama and (oft tightly synchronised and/or slow-mo) movement. Designer Rebecca Brower’s spartan stage, with the cast themselves rolling and sliding bits of furniture around as needed – amidst Anna Watson’s lighting and Mike Thacker’s sound – helps keep requisite momentum rolling and building during the full 1 hour 50 minutes, sans interval!

Tyrone Huntley and Billy Cullum are highly convincing, and charmingly strangely ordinary, as core couple Obi and Alex. Crucially, we really do believe their troubled characters are in love, so our sympathies are engaged throughout their entangled, and ultimately realistically not entirely resolved, tribulations. Both these fine all-round-performers can certainly act, sing and move! Impressive stuff!

The drama also catches light because of Matt Jones’ truthful and well-crafted writing, offering up clearly delineated differences, and cleverly mirrored asymmetries, between the two young men, plus their backgrounds and respective families – brought into explosive focus by the onset of imminent marriage, not least in the superb dinner scene where both “sides” of the extended domestic equation first meet.

Obi has been chucked out of his family home by his repressive and intransigent father, Kenneth (brilliantly played by the charismatic and spellbinding Cornell S John) – who his loving mother, Grace (played with great anguish and tortured dignity by Rakie Ayola) struggles to influence or contain, and finally rebels against. Aretha Ayeh is touching as Obi’s loyal and supportive sister, Chichi. Obi has worked hard to become a successful digital marketeer but has heaps of pent up hurt, needing therapy.

By contrast, Alex has been spoilt, yet likewise damaged, by a family who have always, at least on the surface, accepted him as he is and given him everything – including supporting him through drug addiction and multiple suicide attempts! Far from being a brat, the vulnerability of his courageous ongoing battle against addiction, makes the role thankfully rather endearing. Johanne Murdock is potent as his overbearing, controlling whirlwind of a mother, Diane – well-nigh killing him with kindness, whilst herself splitting with his laid-back father, Brian, played by an aptly passive and worn-down Martin Fisher. Excellent singing, moving and acting too from the exquisite Arun Blair-Mangat – doubling up both as Alex’s debauched pal Damien and as Obi’s childhood-bully-turned-pastor; and from dishy chameleon Sandy Batchelor as friend Raymond, plus narcotics anonymous team leader, plus marriage registrar!

Live guitarist Chrio Blake haunts the action from the onstage shadows pretty much throughout, animating a dramatic and, at times, catchy playlist of Kele Okereke’s tracks that help underpin a story ultimately seeking to expose the uneasy “truces” that all too many gay people broker with their oft at best only partially accepting families; and how the public nature of a gay marriage can effect change not just in our own lives but also in those of our families and, of course, bit by bit, in wider society. Go see.

Leave to Remain runs at the Lyric Hammersmith in London until 16 Feb 2019. For more info and to book tickets, visit www.lyric.co.uk