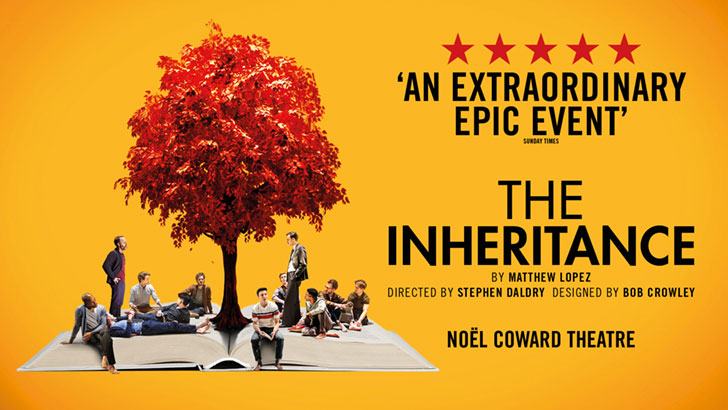 What can gays, past and present, learn from each other? And is community dead? Bent’s Adrian Gillan hails the West End transfer of highly queer, yet universal, epic two-parter, The Inheritance!

The sell-out world premiere of US playwright Matthew Lopez’s The Inheritance took Young Vic audiences by storm back in the Spring; and is now playing the Noël Coward Theatre until mid-January.

This ambitious pairing explores the lives of a group of present-day gay male New Yorkers, notably the relationship between the generation who survived AIDs and those who have come after them; and the notion of “community” – from closet turn-of-century, to Stonewall, to AIDS, to online-assimilated now. The inheritance is of lived knowledge, albeit incarnated through the metaphor of physical real-estate.

It is also an explicit thematic homage to closeted early 20th Century English novelist E.M. Forster, whose Howards End so massively influenced a teenage Lopez and his writing. Forster appears as a character on stage throughout, regularly helping the characters formulate and tell their own stories, on-the-hoof, in a gloriously effective “faux impro” manner – a truly ensemble cast oft crouching around a large, low, empty on-stage platform, waiting to either join the action full-on, or chirp in chorus-like from the shades.

It is these basic elements – bravura script, empty-space “faux-impro” story-telling, first-rate ensemble acting – that, along with humour, sex and multiple coups du théâtre, make this such a must-see hit.

And that’s despite its arguable flaws! More, or as much, could surely be said in less than seven hours. Many of the characters are too unsympathetic, hard to really care about – Toby, especially, despite eventual revelations about his tragic childhood. ‘Sincere’ and ‘sentimental’ tread a fine line. The playful faux-impro can feel overly sketch-like at times. Too many deliberate genre-shifts – from didactic play-of-ideas talking-heads passages that work swiftly through gay socio-political issues, tick-tick-tick, to well-nigh slap-stick comic melodrama. The Adam/Leo look-alike mechanism is not entirely believable. Likewise, Eric’s transition to loving older men – Walter, then Henry. An all-too-fleeting reference to the impact of PrEP on gay sexual dynamics. The recurrent dolls-house backdrop that’s neither set nor prop.

All the more credit, thus, to the work’s dazzling strengths that they far outweigh its several weaknesses.

The core cast of a dozen or so definitely deserve more encores than their ensemble humility permits! Oh, ostentatious modesty! The spell woven is strong enough to survive being broken by claps ‘n cheers!

Though, conceded, somewhat unfair to single-out, take an extra bow Paul Hilton, as the benign yet guilt-ridden story-facilitator, Morgan (Forster), and as selfless Walter! Step forth, sexy-yet-sensitive Samuel H. Levine, not least for your brave and restrained full-frontal nudity as Adam, and for your heroic survivor, Leo, ultimately the most sympathetic role in the piece. All rise for sole-female Vanessa Redgrave, in the very final act, scorching as Margaret, redeeming a past through a devotional present – a performance of breath-taking purity and economy! Frankly, roof-raising ovations to all: Hugo Bolton, Robert Boulter, Andrew Burnap, Hubert Burton, John Benjamin Hickey, Syrus Lowe, Michael Marcus, Jack Riddiford, Kyle Soller, Michael Walters and understudy crew!

The drama’s topicality qua gay politics, notably in the US, should make any Broadway transfer piquant!

Both parts are about 3 hours 20 minutes long, with two intervals. You naturally need to see both shows, in the correct order, to feel the full dramatic force. Though, if needs must, Part 1 could stand alone. Top tip: you can save quite a lot of money if you buy both parts together. And you can binge on both, in a single day, on Wednesdays and Saturdays!