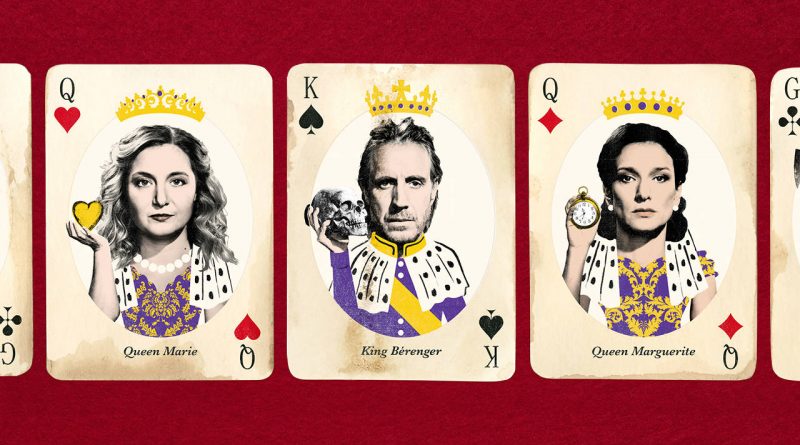 The tragicomedy of our meaningless existence! Bent’s own little futility, Adrian Gillan, gets the point of the National Theatre’s first ever staging of work by Theatre of the Absurd king, Ionesco! From Albee to Stoppard, from Pinter to Pirandello, many very varied writers and playwrights since the 1950s have been associated with the so-called ‘Theatre of the Absurd’ movement, exploring the tragicomic nature of our fundamentally pointless existence – of life, death and dying. Piteous yet funny.

The National Theatre’s choice for their long overdue first ever production of a work by Romanian-French playwright and absurdist giant, Eugène Ionesco, is the third of his four ‘Bérenger’ plays, from the late ‘50s and early ‘60s, all sharing an Everyman-type protagonist of that name, though no interlinked plots.

Premiered in 1962, Exit the King deals with the final day in the reluctantly but inevitably ending life of 400-year-old Bérenger – a kind of Everyman king whose coming to terms with a seemingly needless life and unavoidable death is a struggle, many would say, shared by all humanity. As a species, we are unique in knowing we are going to die – and we cope with this knowledge through denial.  Ionesco, himself especially prone to morbidity, wrote the play to better come to terms with his own fear of dying.

The disintegration of Bérenger’s kingdom is as much an internal disintegration as a physical, external one, leaving him with no one to live with and nothing to live for. As such, it is Ionesco at his most existentialist, the pared-down bleakness here being more akin to his contemporary fellow absurdist Samuel Beckett than his own, usually more riotously accumulatively cluttered, works like Rhinoceros.

Patrick Marber directs his own new version of Exit the King, using a literal translation by Simon Scardifield, in an intense production lasting an hour and forty minutes with no interval.

Perhaps still best known for the film Notting Hill, and fresh from the recent A Christmas Carol at The Old Vic, Rhys Ifans’ King Bérenger clings on for dear life, raging against the dying of the light, in a physically and vocally demanding title role that Alec Guinness premiered in the UK back in 1963; and which won Australian actor Geoffrey Rush a Tony on Broadway just a decade ago.

Ifans brilliantly pathetically energises the urgency of the final hour or so of a life, taking us on a laugh-cry rollercoaster ride of denial then anger, bargaining then depression, through to a kind of cathartic part-acceptance of our common fate – in parallel to a steep physical and mental decline. A plethora of time-honoured and only partly useful coping techniques for this universally destined journey to annihilation are powerfully and humorously explored along the way. Yet, for an essentially bleakly atheistic outlook, Bérenger’s ritual packs a surprisingly spiritual, even uplifting, punch at the end. It is a tour de force tragicomic tightrope walk that Ifans’ makes on our behalf. Breath-taking, mesmerising, spellbinding. The small cast, largely on stage throughout, perform the action on a simple yet bold setting dominated by a massive ruinous imperial-insignia-daubed wall, as the time inexorably, tensely counts down to the known end, punctuated by sporadic live instrumental input from Sarah Campbell as Musician.

The bravura creative team – headed by Anthony Ward (design), Hugh Vanstone (lighting) and Adam Cork (music and sound) – in no small measure help deliver what must surely rank amongst one of the greatest, most transcendent, final moments ever seen on The Oliver’s stage. The hitherto Beckett-like stasis fragments, as the vast wall and set drops and lifts away and the red-carpeted route running through us all down the middle of the auditorium, to the throne, at long last extends onwards into the infinite nothingness. Ironically, what ultimately gives life meaning is the very fact that it comes to an end.

Exit the King runs at the Olivier Theatre (National Theatre) until 6 Oct 2018. For more info and to book tickets, call 020 7452 3000 or visit www.nationaltheatre.org.uk