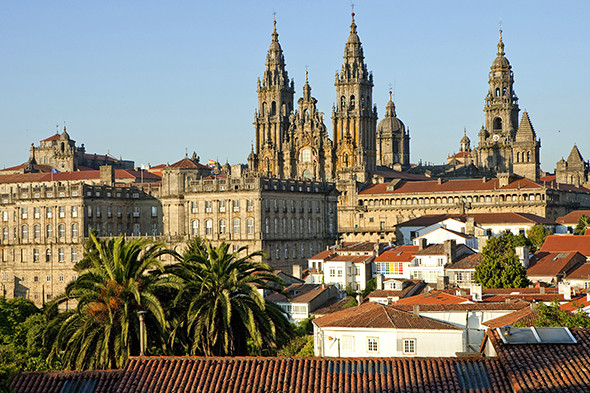 The sacred relics in its Cathedral aren’t the only things due worship! Adrian Gillan makes a long overdue pilgrimage to honour the handsome hunks in student-brimming World Heritage Site, Santiago de Compostela, in northwest Spain! And all a mere short flight away, with fab easyJet! 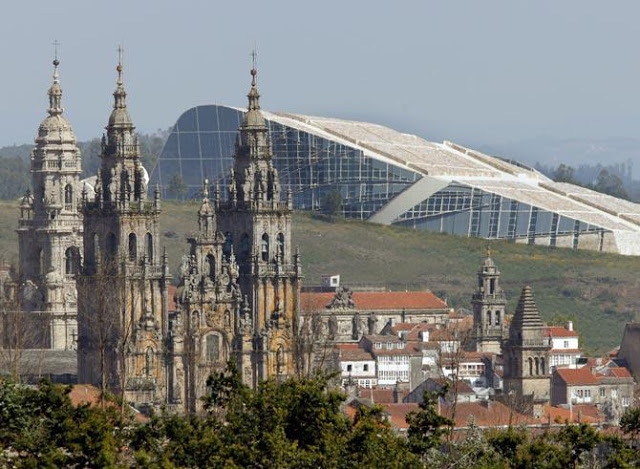 Capital of the autonomous region of Galicia in northwestern Spain, Santiago de Compostela may well be best known as climactic finale of the Catholic “Way of Saint James” pilgrimage route, with supposed relics of said apostle Saint James (Sanctus Iacobus in Latin, hence the city’s name) being housed in its majestic Cathedral; and also for its surrounding Old Town, a UNESCO World Heritage Site since 1985.

But the city also boasts an ancient uni, since early 16th Century, now fuelling nightlife – including a small yet beautiful gay scene with sexy students and local guys, oft spouting both Spanish and local Galician!

Note: whilst little Santiago de Compostela is home to just 100,000 inhabitants, a third of them students, over 100,000 more people make the pilgrimage here each year, from all over Europe and around the world – even many times that number in “Holy Compostelan Years”, whenever 25 July falls on a Sunday! Including: abstemious and physically frustrated younger male pilgrims, all adding to the swell! Alleluia!

And, with low-cost carrier easyJet serving Santiago de Compostela from London Gatwick, you can join the crowd, minus that sweaty land trek – with extra cash left in your pocket to use once here! On time, and with highly personal yet professional service, easyJet always delivers what it says on the tin! Ace!

Can’t face some pilgrim backpacker hostel? Stay, instead, at historic and monumental on the outside, yet modern and chic on the inside, 4-star Hotel Compostela (c/Horreo 1, Santiago de Compostela; T: +34 981 585 700), slap-bang in the heart of the city, near scene and sights! The air-conditioned rooms boast trendy décor and parquet floors, all with free Wi-Fi, satellite TV, minibar and private bathroom. Enjoy room service; or relax in the ambient lounge area, or at the bar, or in the HC Café! Fab breakfast buffet too! Just amazing!

You can also explore modern arty hubs like Centro Galego de Arte Contemporánea , notably during its current show Bañistas, of homoerotic vintage photos of semi-nude male bathers, on until Oct 2017; or space-age hill-top City of Culture of Galicia, with its free exhibitions relating to Galicia. Enjoy sundry peaceful parks that well-nigh ring the city, such as the San Domingos de Bonaval, Belvis, Alameda or Vista Allegre.

Even if no saint yourself, don’t miss the splendour and beauty of a Pilgrim Mass at the Cathedral, maybe also touching (or hugging!) the Saint’s main statue, inhaling sweet incense from the whopper smoke-swinger and even confessing selected sins!

And sin you well may! Santiago’s student-powered gay scene is small but perfectly-formed, hubbed around two nominally “mixed” but actually de facto gay bars, albeit straight-friendly, both a short stumble from each other; plus one tad-far-flung sauna! Things start late in Spain, so you’ll need that disco nap!

And gents have oft been known to ‘take airs’ of an eve in and around the Belvis Park maze, on the southern fringe of the Old Town. As ever, beware!

Plus: you mightn’t be in Sitges exactly but, with modern dating aps, the pretty boys are rarely far away! Including a surprising number of those naughty pilgrims! Glory be!

easyJet flies from London Gatwick to Santiago de Compostela, up to four days per week, with prices starting from £25.24 per person (one-way, including taxes and based on two people on the same booking). This brill, great-value airline is punctual, offering friendly yet professional service; and boasts a vast and ever-expanding network of other exciting routes, covering much of the UK, Europe and beyond.