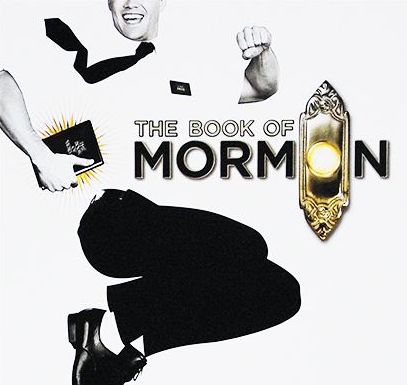 My Expectations for The Book of Mormon: Three hours of sneering at the Self-righteous, small minded and moronic people who could ever believe such nonsense. Three hours of vicious parody, reducing an entire religion and its followers to a crude series of jokes. I couldn’t have been more wrong.

The Book of Mormon wasn’t condescending, or vicious, or cruel. It was incredibly clever, and nuanced, and kind. And still, it was the most hilarious, outrageous and crude show I have ever had the pleasure to watch. It was hilariously written, incredibly acted, beautifully sung satire, showing that yes, most aspects of belief are a bit ridiculous, but ultimately it is a force for good.

The music is an eclectic mix of Ballads, Jazz numbers (including tap), Rock, Disco and African Tribal Music, sometimes all in the same song. The scenery (most notably Salt Lake City, the African Village and the Spooky Mormon Hell Dream), is imaginative, detailed, and incredibly beautiful. This isn’t just a side-splitting comedy, it’s great all-round entertainment.

Set in a small Village in Uganda (another thing I wasn’t expecting), the story follows two Mormon Elders at the beginning of their two year mission to bring the Book of Mormon to the people of Africa. An unlikely pairing, Elder price is a good-looking, narcissistic, over-achiever,  while Elder Cunningham is a needy, geeky, serial embellisher. Upon arrival, their luggage is stolen and their guide tells them the saying used in that part of Uganda whenever anything bad happens. Have a listen, this song is pretty much the epitome of the show.

The pair then meet the rest of the districts Mormon missionaries at the house they’re to share for the next two years. They’re taught the ‘neat Mormon trick’ of turning off certain thoughts, feeling and emotions.

When you start to get confused
Because of thoughts in your head –
Dont feel those feelings –
Hold them in in-stead!

I wont ruin the story by continuing, but here are some other highlights:

None of the Americans being able to pronounce Nabulungie’s name; calling her Na-Bon Jovi, Neutragena, Nigel Farrage.

“You need to remember that Prophets always speak in metaphors.”
“Yeah, you don’t think a man ACTUALLY fucked a frog do you? Thats fucking stupid.”

If you’re the kind of uptight über conservative douchebag, or militantly PC prick who looks for any reason to be offended, then this show would be your goldmine. You would be able to complain for hours on end about all the crude, offensive, discriminatory jokes, but you’d be missing the point entirely, refusing to acknowledge that this style of humour has substance and artistic integrity, and isn’t vulgarity for vulgarities sake.