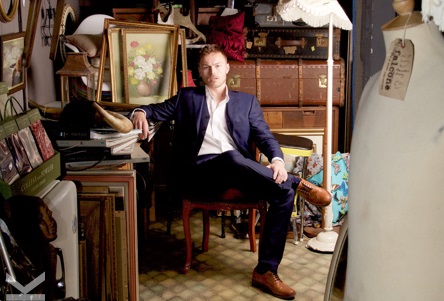 Cucumber/Banana star Andrew Hayden-Smith covers THEGAYUK with an interview detailing his awkward sex scene in Cucumber/Banana, how he knew he was gay from the age of five and how his Dad’s battle with Leukaemia has spurred him on to fight for the rights of gay men to donate blood in the UK.

Andrew Hayden-Smith is a history maker. Ten years ago he became the first ever kid’s TV presenter to come out as gay whilst on the job. Since then he’s become a steady player on the screen in the UK appearing in Doctor Who and most recently in Channel 4’s hit series Cucumber and Banana. On why blood donation should be allowed from gay men:

Well, the main reason I wanted to get involved with it, is because my dad has leukaemia, and so being in hospital with him and seeing him have regular blood transfusions is the reason that I took notice of the campaign that’s going at the minute. I just think it’s baffling isn’t it? There’s no scientific reason to back it up, so why on earth can’t we donate blood? It’s crazy really. So hopefully things will change with this petition and campaign. I was talking to a friend about this, and this might upset some people, but he said, “it’s discrimination, there’s no reason to back it up so it’s discrimination,” – and I’m afraid he’s right. A lot of gay people I know would donate blood if they could.

When he first knew he was gay:

I always say five. I had the hots for Todd (Neighbours) and Annalise’s boyfriend, the Chef… I knew I fancied him! On being bullied at school:

I used to get called all the usual slurs just because I was on a TV program. They just assumed that I was (gay) I think. I did used to have quite a lot of girl mates which probably didn’t help matters, but it was a typical North-East comprehensive school. There was a lot of kids that used to get bullied, I wouldn’t say I got badly bullied. Everybody used to get name-calling, It’s a horrible time isn’t it? I would not go back to comprehensive school if you paid me I don’t think Cucumber’s coming back because it sort of wrapped up, I think Russell said it was always going to be a standalone series. I heard a rumour that there might be another Banana, or at least they said there’s definitely room for more… I’d love it if Banana came back and we were able to pick up where my character and Dean left off in the hotel room.

Issue 15 is out now, available on iTunes newsstand and Android.