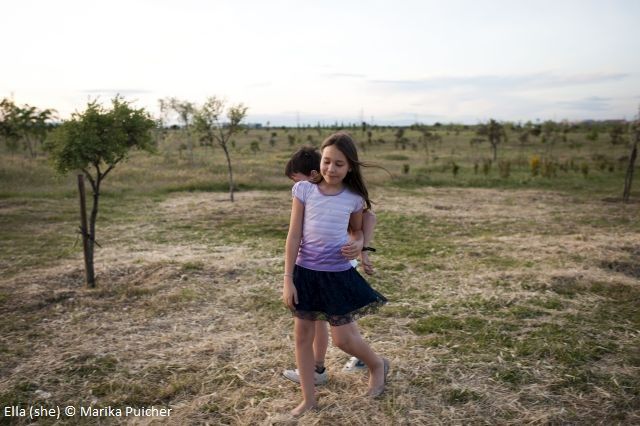 A photo of an 11 year old transgender girl playing outside with her brother, made by the Italian photographer Marika Puicher, is the winner of the fifth edition of the international Pride Photo Award.

Margriet van der Linden, chairman of Pride Photo Award: “We are extremely proud of this winner. The jury selected her image out of more than 3.600 entries from 60 different countries. That makes it quite an achievement. And what makes this photo extra special is that stories about transgender are so often focused on drama, but this is an image of true hope. And this is what we would like to achieve as Pride Photo Award: giving hope and positivity to the sexual and gender diversity discussion”.

The photo shows a happy, carefree girl, playing outside with her brother. It is an engaging photo: there is a narrative in the image, a story behind it and this image invites you to find that story. There is an extra layer in the image. We see Eli in front, her brother behind her, you can’t see his face. It has a poetical quality: as if she emerges from the figure of the boy, a part of her past that she carries with her. Yet there is no drama in that: it suggests that there is a freedom on the other end of her transition, and a happy and rich life.

Vince Aletti, photo critic at the New Yorker, and member of the jury of the first Pride Photo Award in 2011: “Compared with five years ago, the quality and range of the entries has really improved 1000%. What attracted me most in the winning entries are the stories that come from a personal point of view: original ways of storytelling, whether art photography or documentary.”

Jury chairman Frank Kalero adds: “It is good to see that the professional community of photographers is starting to take Pride Photo Award seriously, they see that it is a good way to legitimate and share the work they are doing. There was such a wide range of subjects from all over the world, and we were happy to see that many of them were made by insiders: people telling their own stories. Those are often the strongest entries.”

The Award Ceremony for the 2015 edition of Pride Photo Award takes place on Friday September 18 in the historic Old Church in Amsterdam. The exhibition, officially opening on the same day in the Old Church, will end on 25 October.