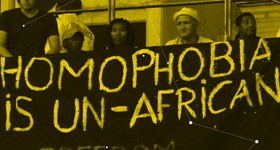 According to the new report, in the American blog site: www.frontiersla.com titled ‘The Export of Hate’, these extremists “work tirelessly to undercut LGBT people around the world at every turn.”

“They spew venomous rhetoric, outrageous theories, and discredited science. Some claim that LGBT people are responsible for the Holocaust, the Rwandan genocide, and the spread of HIV/AIDS. Others argue that LGBT people are luring away children, and that acceptance of LGBT people will lead to the destruction of families around the world. Some even suggest that the death penalty could be an appropriate punishment for simply being LGBT.”

One of the extremists discussed in the report is Scott Lively, whose work inciting anti-gay hatred in Uganda is widely held responsible for helping to pass that country’s ‘Kill the Gays’ bill. Ty Cobb, HRC Foundation’s director of Global Engagement, said:  “Hate is not an American value, and we must expose and fight these individuals and their extremist allies. This is a destructive group of activists spreading anti-LGBT rhetoric, promoting laws that criminalize LGBT people, and seeking to restrict their speech and those who support them.  Although their views may find little traction in the United States, public opinion in many other nations makes their words and global advocacy fundamentally dangerous.”