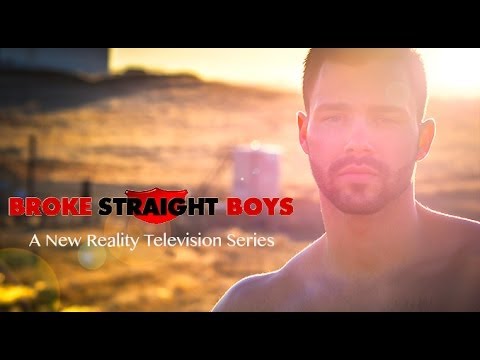 A trailer for Broke Straight Boys’ new reality show leaked two weeks ago by a model for the site garnered over 100,000 views on YouTube and was disseminated across the web. In response, the official trailer for the upcoming reality show has been released ahead of schedule.

Spotlighting the various people involved in this taboo and unconventional lifestyle, the show examines the dynamic relationships between Mark Erickson, owner of Broke Straight Boys, his staff, and the models. As dysfunctional a family as you will ever find this group of colourful characters will keep viewers mesmerized at every moment.

The industry is shrouded in controversy, but Erickson, believes people are unfairly judging his creation. “There are a lot of people who have a negative view of the entire gay for pay business, but these are grown adults who are capable of making their own decisions. There are plenty of positives that I believe the show will help showcase. We have gotten many guys off the streets.” Many believe it is nothing more than a marketing tactic. Critics argue that these boys are really just conflicted gay men who are packaged to fulfil the “unattainable” straight boy fantasy. The new reality show delves deeply into the subject to answer the question once and for all. “People don’t believe that we’re straight, but in certain circumstances, a lot of us need the money badly. Sexuality is not the issue. It’s about survival. You’ll do what it takes to provide for your family,” says performer Jimmy Johnson. “It would take me months at a fast food restaurant to make what I do in a weekend.”

The series, produced by Hot Mess Productions and Loyal Productions, is currently involved in network discussions and will debut later this year. “We are very close to making an official announcement,” says Erickson. The question remains, how will the rest of the world react?

“We’re just like one big dysfunctional family, except that we have sex with each other,” says performer Kaden Alexander. “Broke Straight Boys is like my second family”.

The official trailer is available on YouTube at: http://youtu.be/QjBIHbE9T3w  or at BrokeStraightBoys.tv