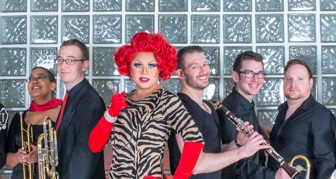 “If being on prime time TV gives a sign to our international LGBT brothers and sisters that things can be better, then we have done our job.” (Stuart, Saxophonist)

La Voix aka vocalist (Chris Dennis) and the London Gay Big Band made an impressive debut a few weeks ago on Britain’s Got Talent with the timeless classic New York, New York.

The London Gay Big Band are an impressive big band comprised of five saxophones, four trombones, four trumpets, a keyboard, bass, guitar and drums. They are also the only LGBT Big Band in the whole of the UK.

Alesha Dixon told the group: “That’s how you make an impact! You’re a force to be reckoned with.”

However Britain Got Talent’s loyal fans know that Simon is not usually a big fan of drag acts and detests it if they win a spot in the live semi-finals. However they have! Luckily, he was not available to judge as his partner, Lauren Silverman, went into labour with their son Eric.

Yet David took upon himself to vote for Simon Cowell and said “I know Simon loves drag acts so I’m saying, yes for Simon, yes for me.”

For the group, this is a momentous occasion and they explain that “when we founded the London Gay Big Band three years ago in a damp and dingy basement of a London bookshop, we could never have dreamt of the amazing journey that we have been on, culminating in our upcoming Semi Final performance this week on the World’s most prominent Talent show and a global stage!

As the only LGBT Big Band in the world, we are proud and privileged to showcase our unique style, music and energy to the entire nation. With Conchita winning this year’s Eurovision song contest, the Zeitgeist is absolutely right for another LGBT and gender-stereotype breaking act to be showcased on national television and on digital platforms across the globe.

We take our responsibility very seriously, proving that the gay scene is so much more than many of those pre-conceived stereotypes that are so often still prevalent amongst society. Our Band is about making music and creating a community spirit by supporting each other and breaking boundaries. We want to bring something fresh, new and exciting to the LGBT scene and beyond.

So if there’s one thing you do this week – watch Britain’s Got Talent, and make your vote count! Let’s show our nation the true diversity, variety and spirit of the LGBT community.” Vince Walsh, one of the band’s trumpet players adds that “People forget that Big Band and Jazz music are about fun and emotion. Well, we’re here to remind you”.

For more info about the band please see www.londongaybigband.com