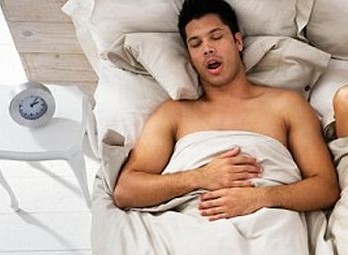 You know that things are getting bad when your sexy partner, who you cuddle and snuggle up to every bedtime, asks you to spend the night in the other room.

‘Oh God’, you might think,’ he’s going off me, perhaps he’s found someone else, what if he wants this to be a permanent arrangement… I need to night time nuzzle!!!!’ Well it might not be for those reasons, he might simply want to get a night’s sleep because of the noise.

According to research one in four of us now sleeps in a separate room to our partners, with snoring being cited as one of the main reasons we kick our men out of bed.

Whilst sleeping in different rooms can mean less sex from the off, it also appears that snoring can have a bigger impact on our sex lives with it leading to lower sexual energy and less satisfying sex.

While you are asleep, the airways in your neck and head relax and narrow. It is thought the narrowing of the airways increases the speed at which you are breathing out and changes air pressure in your airways. This causes the soft tissue to vibrate by sucking the sides of the airways in.

The same effect can also be the result of partially blocked airways, which may be caused by conditions such as enlarged tonsils and colds.

Evidence suggests snoring will get worse over time if left untreated. Vibrations that occur during snoring appear to damage blood vessels that supply muscles in the head and neck. This may, over many years, cause the muscles to weaken.

If the muscles in your head and neck become weakened, their ability to keep your airways open will be affected, making you more likely to snore frequently and loudly.

Some things that can increase your risk of habitual snoring include:

Obesity – particularly if you have a large amount of fat around your neck, people with a neck circumference of more than 43cm (17 inches) usually snore a lot

Drinking alcohol – alcohol relaxes your muscles when you sleep, which increases the narrowing of your airways

Sedatives and some types of antidepressants – in some people, these medications can have a similar effect to alcohol on the muscles

Smoking – tobacco smoke can cause your airways to become inflamed, which increases the narrowing of the airways

People with severe snoring may have obstructive sleep apnoea (OSA), a condition where the airways become temporarily blocked during sleep. http://www.nhs.uk/

There are some remedies on offer such as ‘Helps Stop Snoring Throat Rinse’, which is used like any other mouth wash before bed, and has the similar anti-bacterial and breath freshening properties, but where it differs is that also contains a unique blend of essential oils that work to tone the soft tissues at the back of the throat – snoring often occurs when these soft tissues relax and vibrate as we breathe during sleeping.                       Available in most major retailers,    www.stopsnoring.co.uk