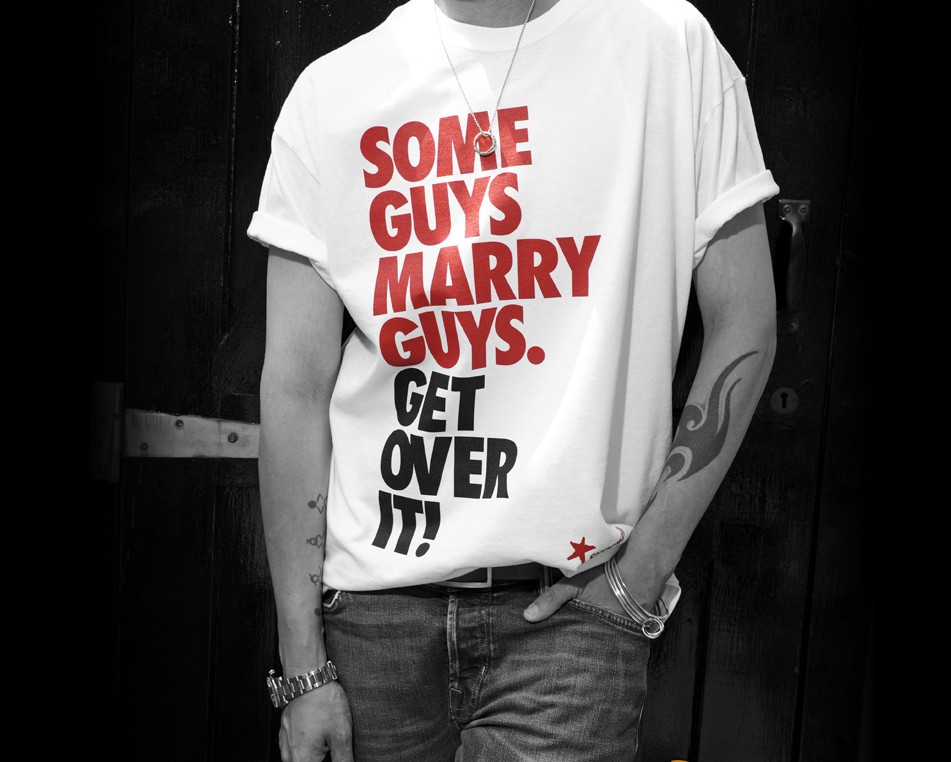 Following the House of Lords’ historic decision yesterday to pass the Marriage (Same Sex Couples) Bill an array of celebrities have joined a Stonewall campaign to celebrate equal marriage.

The campaign – in partnership with g3 and Out in the City publishers Square Peg Media – sees stars including Gok Wan, Stella Duffy and Dr Christian Jessen pose in Stonewall’s new ‘Some Guys Marry Guys/Some Girls Marry Girls. Get Over It!’ t-shirts. The celebrities have also given their views on why equal marriage is important to them.

Coronation Street star Charlie Condou was the first to have his photo taken, and said: ‘Equal marriage means everything to me – finally gay people will be recognised as people.’ Comedian Jen Brister said: ‘Equal marriage isn’t just about the opportunity to get married to my partner. It’s about my relationship being acknowledged by law and society as equal to any heterosexual relationship. It might be different, but it’s not second-best.’

Other stars involved in the campaign include comedian Julian Clary, writer Sarah Waters and A Chorus Line’s John Partridge. X Factor star Rylan Clark and supermodel Eden Clark have also posed in the shirts. The images will all feature in special editions of g3 and Out in the City magazines in August, and will be released over the coming days on Stonewall’s Facebook and Twitter (@StonewallUK). Stonewall Director of Fundraising Catherine Bosworth said: ‘Equal marriage is a truly amazing achievement, and we’re delighted to be working with Square Peg and our celebrity friends to celebrate it.’

Stonewall’s new t-shirts are available at Stonewall’s Shop, along with a range of other Stonewall merchandise.