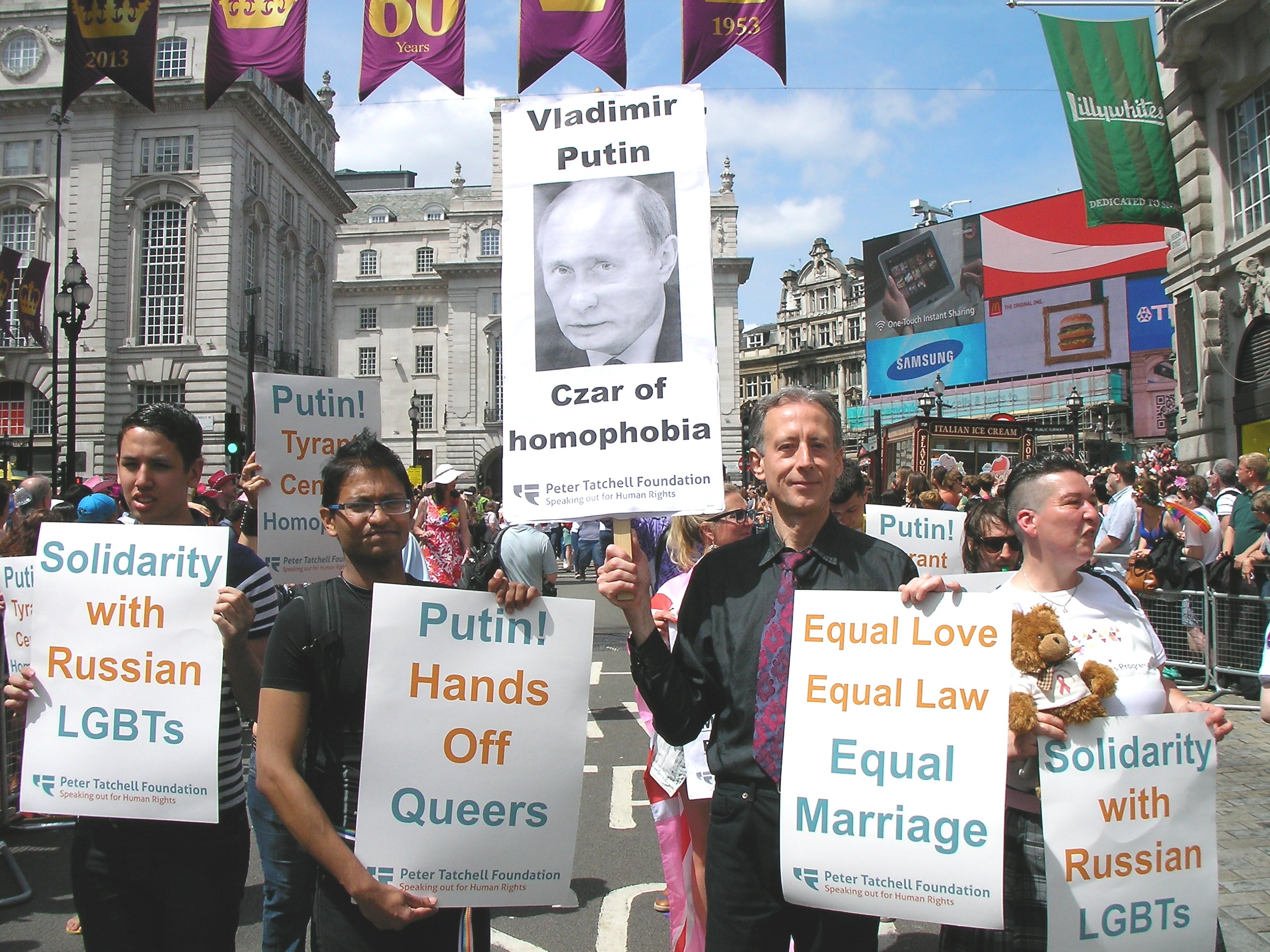 “President Vladimir Putin has signed into law the new anti-gay Bill that criminalises LGBT freedom of expression. The adoption of children by gay couples has been banned by the Russian parliament and gay organisations are being fined as ‘foreign agents’. These are the latest examples of escalating homophobic repression in Russia,” said Peter Tatchell, Director of the human rights advocacy organisation, the Peter Tatchell Foundation.

Mr Tatchell was bashed and arrested four times for participating in successive Moscow Gay Pride parades, from 2006 to 2011. He added:
“LGBT people in St Petersburg who attempted to hold a Gay Pride march last Saturday were violently attacked by neo-Nazis and ultra nationalists. The police failed to adequately protect them. At least seven LGBT people were hospitalised with injuries. Around 60 peaceful LGBT protesters and some straight allies were arrested, with many being roughly manhandled by the police and detained for hours in police stations.
On 25 May, an attempted Moscow Gay Pride parade was broken up and the participants arrested. Earlier, the parade was issued with an official banning order and the organiser, Nikolai Alekseev, was sent two intimidating letters by the state authorities.
Previously, the Russian courts banned Moscow Gay Pride parades for 100 years.
In June, the St Petersburg LGBT organisation, Coming Out, was fined 500,000 roubles (nearly £10,000) for allegedly accepting overseas funding and refusing to register as a ‘foreign agent’. The Russian LGBT film festival, Bok o Bok (Side by Side), suffered a similar fate, despite receiving no funding from abroad. The fine is huge by Russian standards. It will be a debilitating financial burden on both organisations.
Last month, a Russian MP, Alexander Mikhailov, a deputy in the regional Trans-Baikal parliament, announced plans to introduce a law to have LGBT people seized by soldiers and publicly flogged in town squares.
At least two men suspected of being gay/bisexual have been beaten to death in recent weeks. Others have been badly beaten. The police mostly do not take anti-LGBT violence seriously and fail to give proper support to the victims.
“We salute the courageous activists in Moscow, St Petersburg and other Russian cities who have protested peacefully for LGBT equality and have been beaten and arrested. They have shown extraordinary, inspirational bravery,” added Mr. Tatchell.
“The new anti-gay law is symptomatic of President Putin’s increasing authoritarianism and his wider, generalised crackdown on civil society. It violates the Russian constitution, which guarantees freedom of expression, and the European Convention on Human Rights, which Russia has signed and pledged to uphold.
“Although the new legislation is ostensibly aimed at prohibiting the dissemination of so-called ‘gay propaganda’ to young persons under 18, in reality its damaging effect will be much wider. It will criminalise any public advocacy of LGBT equality or expression of gay identity where a person younger than 18 years old could potentially see it.
“In practice, LGBT marches, festivals, posters, magazines, books, films, welfare advice and safer sex education are likely to face criminal prosecution, as will individuals who identify themselves as gay in public.
“Any statement that homosexuality is natural and normal will become criminal, as will the provision of gay-affirmative counselling or safer sex information to LGBT youth. “Putin seems hell-bent on forcing LGBT people back into the closet and locking the door.
“This law is effectively a blanket censorship of any public expression of same-sex love, gay identity and LGBT human rights.
“It could result in the purging of books, films and plays with LGBT characters and story-lines from libraries, galleries, theatres and cinemas, including many classic works of art and literature.
“It is one of the harshest laws against LGBT freedom of expression anywhere in the world,” said Mr Tatchell.
If you have not already done so, please sign the All Out petition against LGBT persecution in Russia.