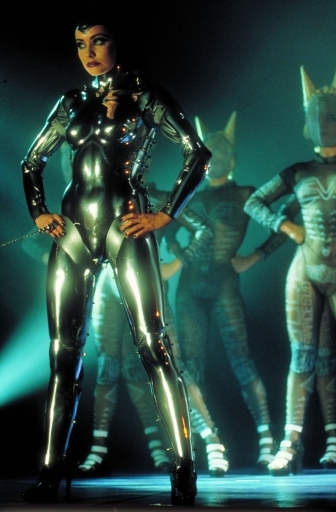 ‘Preaching to the Perverted‘

The first mainstream film set squarely on the fetish club scene, which became a cult success after being dropped by the BBC as too racy, is now launching a campaign to raise funds so that it can be digitally restored and revived for the Fifty Shades generation. Interest in kinky topics has found ‘Preaching to the Perverted’ a new audience, but the technology used to make it has meant that a revival on Blu-ray and HD digital download requires extensive restoration work. In order to fund this, the production company today launches a campaign on crowd-funding website, Kickstarter to restore and remaster the 35mm original. They aim to raise £18,000 for the film to be preserved and reach a wider audience in HD.
Back in 1997 its release did lead to controversy, being the last film of the twentieth century to be banned in Ireland and even being cut for home video rating in the USA in 2003. The BBC had developed but then dumped the project for being un-showable – yet ended up screening it several times anyway! Not only the fetish scene, but LGBT, music and fashion press embraced the film and helped it become an enduring cult hit and additionally there have been tribute clubs or nights in several countries in the fetish and Goth scenes, and burlesque performers being named after the film, the clubs it features and its main characters.

Tim Woodward of Skin Two magazine and a number of key scene people are also solidly behind the restoration project. Said Woodward: “This is the only really good film ever made that’s set in the BDSM/fetish world. Every fetish person should see it”. Rewards and prizes are coming from Jed Phoenix of London, Coffee Cake & Kink, Mistress Caramel, Mistress Velour, and many more without people necessarily having to contribute money to the campaign – though the minimum is only £1.

Director Stuart Urban said that; “unlike the studios, we indies don’t have deep pockets to remaster our 35mm work, so crowd funding to our loyal fans represents the fresh and ideal way to save this film.”
Some great rewards are on offer, and a strong start is vital to its 30 day campaign, so run, don’t shuffle to: