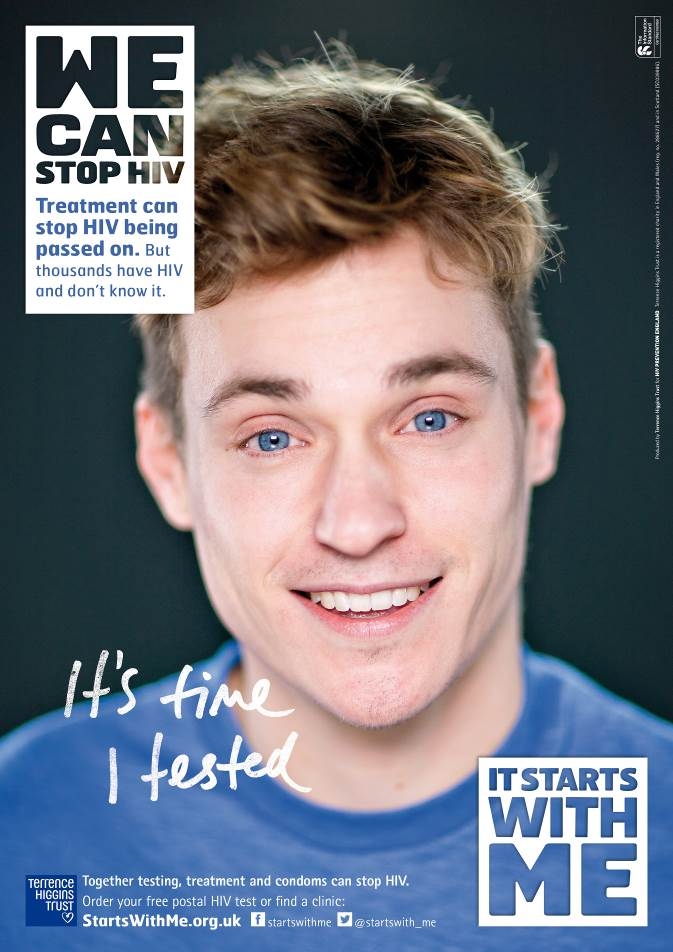 Gay and bisexual men in England have the power to halt the spread of HIV in their community within a generation, according to a major new campaign launched today by HIV Prevention England (HPE).

It Starts With Me will run until Spring 2015, making it the largest-scale HIV prevention campaign to target gay men in this country to date. Created by Terrence Higgins Trust and funded by the Department of Health, it will reach men through press and online adverts, posters in gay venues, and will be rolled out across England through a network of national and regional organisations, funded by HPE to promote the campaign in their local communities.

For the two year duration of the campaign, It Starts With Me will rotate between a number of health messages, providing men with information and advice on how to protect themselves and their partners from HIV. The campaign’s over-arching message is simple: every sexually-active gay and bisexual man in England can help stop the HIV epidemic in its tracks by:

•    Testing for HIV at least once every twelve months, and more frequently if they have taken a risk, have a high number of partners or show symptoms of seroconversion illness.
•    Taking the medication they need to stay fit and well, if they have been diagnosed with HIV.
•    Protecting themselves during sex by using condoms and finding other ways to avoid risk.
•    Participating in community action by finding a way to support the campaign and spread the word to their friends and contacts.

Scientists and public health bodies agree that this combination of measures would drastically reduce undiagnosed HIV among gay and bisexual men, long recognised as a key factor driving the epidemic. A short video clip at https://mag.bent.com/gay-hookup-ad/ explains how modern drug treatments can reduce the level of virus in the body to an undetectable level, meaning someone with HIV who has tested and is on treatment is far less likely to pass the virus on than someone who remains undiagnosed.

Cary James, Head of Health Improvement Programmes at Terrence Higgins Trust said: “While a cure or vaccine for HIV remains stubbornly out of reach, what many gay men don’t realise is that medical advances mean it is now within our community’s grasp to stop the virus in its tracks. By getting as many people with HIV as possible tested and on effective treatment, we will see new infection rates fall rapidly.

“To succeed in this, we need gay and bisexual men to understand that HIV is just as relevant an issue today as it was in 1982. Every day in this country around eight more gay or bi men are diagnosed, and that number is increasing. We can reverse this trend, but we must do it together or not at all. Each and every one of us has a responsibility to keep ourselves and our partners safe, so the message really is that HIV prevention starts with you… and you… and you.”

Gay and bisexual men are invited to sign up to It Starts With Me by visiting https://mag.bent.com/gay-hookup-ad/ . From there, they can assess their sex life to find out when they should have their next HIV test, find the nearest place to take a test and order a free HIV postal testing kit. There will also be a dedicated Facebook page where people can join in the conversation, and share stories and online resources. People will be encouraged to champion the campaign by sharing Facebook posts, tweeting stories and spreading the word among their local communities.

HIV Prevention England is a partnership of community organisations headed by Terrence Higgins Trust and funded by the Department of Health to carry out national HIV prevention work in England among communities at an increased risk of infection.

Visit single parent black families, the new site for everyone living with HIV in the UK
To make a donation, or to find out about everything that we do visit meetup ireland