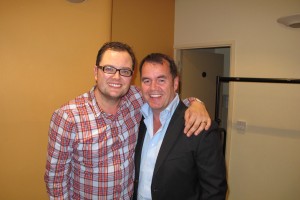 Recently I organised a coach trip outing (no not that sort of outing) for my staff to go and see my good friend Alan Carr doing a warm up gig before he starts his massive Spexy Beast arena tour. He’d asked me to pop in to say hello before the show and we chatted before he went on in front of the packed 1500-seater Victoria Theatre in Halifax.

Sitting in the dressing room with his dog, a gorgeous Red Setter, he tells me that most people expect to see him with a Chihuahua or some other type of toy dog not a large, curly-haired, lively animal which he’s affectionately called Bev – in homage to that feisty Coronation Street redhead Beverly Collard. As he stroked his hairy friend (oops sorry couldn’t resist it) I wondered if he was nervous of doing arenas but he thought it all seemed an inevitable development to his career. He said he preferred the theatre setting for his act as there was more intimacy but realised that comedy is now the’ BIG THING’ and, seeing as everyone else was doing them, he didn’t want to miss out. So, albeit reluctantly, he decided that huge arenas and a completely fresh act would be his next project. He told me that the new show had in fact been ‘under construction’ since 2005 but that there would be no hint of his Tooth Fairy show, which was all about his childhood. Now the public were going to find out more about him. Same observational style but he has a lot more to say in that wonderful, self-deprecating way that has made him such a favourite of the masses. 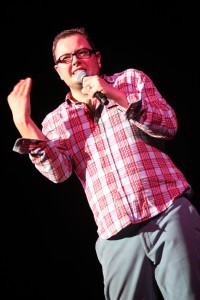 I’ve known Alan for a few years now and watched as his career has taken off into the stratosphere so I always enjoy my time chatting to Chatty Man… and it appears I’m not the only one. I’m a great fan of Twitter and occasionally tweet myself but it is Alan’s regular postings that have me in fits of laughter as he appears to have something new and funny to reveal every day. Stephen Fry may have millions of followers but it’s the daily posts, and growing number of followers that make Alan the comic genius of the twittersphere. 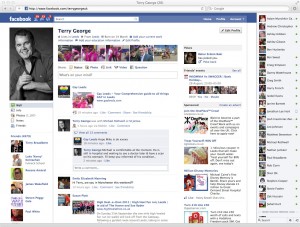 I have been fraped. That is the technical term for being Facebook raped, and it wasn’t a very good experience at all. I was in the VIP lounge at Barcelona Airport and went on one of their computers to check my Facebook pages. Now the problem with some foreign computers is they don’t have the same keyboard as the one I use in the UK and I couldn’t find the @ sign. Trying to track down this illusive symbol I opened my Facebook page again and worked on that until I was called through to catch my plane. Unfortunately, I only closed down one of my pages leaving the other forgotten and open on the bottom bar. When I disembarked from my 2 hour flight and switched my mobile phone back on I was inundated with texts and missed calls. Apparently someone had gone onto my Facebook page and said that I was dead. RIP Terry George, funeral and more info to follow. Calls from friends, relations, colleagues were all wondering what had happened and because I had turned my phone off for the flight, the fact that they couldn’t get hold of me only served to make matters worse. Panic and a great deal of unnecessary misery was caused by my moment of forgetfulness but whoever did it… and the fact that this happened in the VIP lounge… makes me question the mentality of someone who thinks this type of frappe is funny. They had also changed all my settings so sorting out the page was a lengthy process… so be warned… make sure you close everything down if you are using a strange computer. 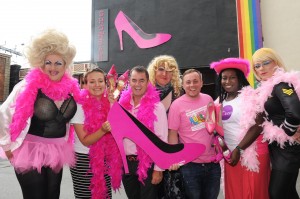 I get asked to get involved in charity events all the time and some I’m more than happy to take part in while others I try and steer clear. However, this year I am supporting the High Heel –a-thon in my home town of Leeds, which is raising money for a couple of cancer charities. This idea was originally started in New York as a way to raise money and awareness for certain charities but this is the third such event into take place in Leeds and all have proved successful in helping to do just that. Now, although I am keen to take part, I do have a problem. Unlike many of my contemporaries I have never been one to wear my mother’s shoes, not even as a precocious little kid experimenting with my… er… sexuality… or attempts to look taller. In fact my mother was never a high heel fan. She preferred flats and certainly nothing over 2 inches (a motto I have stuck with to this day). I’m worried about being able to cope with wearing high heels and finding a pair that I can squash my size 9s into but also how I’ll navigate the mile course without tripping over or falling to my doom. I’ve enlisted the staff from my bars – Viaduct and Fibre – to show their support and join me, together with Kimberly from Girls Aloud, various soap stars, celebrities, local government officials and members of the public who have all signed up to take part. Now then, the object is to raise as much cash as possible so, if I approach you armed with a sponsor form I don’t want you running away (high heels or not), just a couple of pounds will do… and it is for a cause that, percentages say, will affect everyone at some level at some time, so if you can, be generous. The event, which takes place on Sunday 25th September, kicks off at the Gateway complex on East Street, Leeds and follows a 1 mile route around the city, taking in many of Leeds’ best known landmarks such as the Corn Exchange, the river Aire and Brewery Wharf.
For more information and to register, visit the official High Heel-a-thon website at www.highheelathon.co.uk