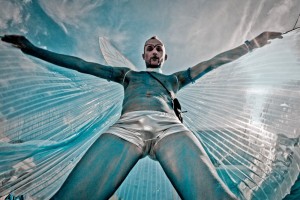 On the back of the riots across the UK many Pride events, as well as over-stretched police forces, were worried about large numbers of people congregating anywhere in case of trouble. Most events are going ahead and those that have happened report everything has gone off peacefully. Brighton Pride was unofficially retitled ‘Rave Not Riot’ as tens of thousands of revellers hit the seaside town for the annual Pride Party. Because of complaints about last year’s event; rubbish, too many people, not enough security etc, etc, this one was ticketed and an admission fee was introduced for the very first time. After the parade through the town it was on to Preston Park for the entertainment and, as the sun continued to make its presence felt, the crowds enjoyed a top line list of celebrities including Joe McKelderry and Alexander Burke. The organisers were pretty pleased with this new and improved Pride but as yet had not been able to calculate if the event paid for itself or turned a profit.
Photo: Heather Buckley via Flickr 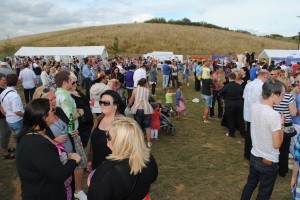 Doncaster Pride
Last year Doncaster Pride looked like it would never happen but with a supreme effort the organisers booked the city’s racecourse and held the event against all odds. This year, the racecorse was deemed too big and sprawling to accommodate the event successfully so they transferred to the Keepmoat stadium where the thousands of visitors were kept happy with nonstop entertainment. Tribute acts and flamboyant drag were the order of the day but there was also a funfair, stalls, fashion show and even civil partnership advice for those planning on doing the deed.
Trevor Jones, chair of Doncaster Pride, said moving to the stadium gave the festival the chance to ‘develop and grow’… and the general opinion was that the Keepmoat was a safe and friendly environment for any future Prides. 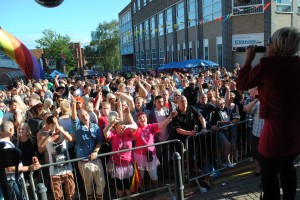 Rainbow flags and drag queens were the order of the day for this year’s pride, with an assortment of X Factor and Eurovision stars there to entertain the crowds. Taking as its theme Pride not Prejudice the event took place under one of this summer’s few sunny days and attracted a very supportive crowd into the city. Local gay venues made sure the event was a success and singer and Pride stalwart Soraya Vivian proved a popular addition to the stage and had everyone bopping along to her energetic set. 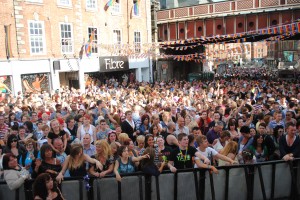 Leeds Pride
Despite the weather being trifle inclement, Leeds Pride notched up another success as this annual event carries its own yearly momentum. Crowds of people crammed into Millennium Square to watch a cavalcade of acts from the world of pop and cabaret perform under cloudy skies to an enthusiastic, partying, colourful audience out supporting the LGBT community. Later, the celebratory atmosphere moved to the Queer Quarter in Lower Briggate where all the bars and clubs are situated for a street party that went on until midnight. All the venues were jam-packed as no one seemed to want to go home so… as all gay boys and girls know… you don’t turn into a pumpkin at 12. 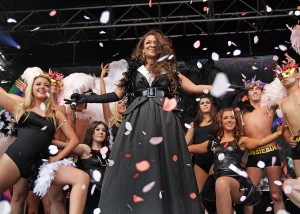 LIVERPOOL PRIDE
Over 40,000 people flooded the streets of Liverpool to enjoy the second office Gay Pride festival, held at the city’s iconic waterfront, on Saturday 6th August.
The number of attendees was almost double that of the first Pride festival, which attracted 21,000 to the city in 2010, with  35,000 attending the main Pier Head festival site and a further 5,000 revelers visiting the Stanley Street fringe events.
Thousands of people lined the streets as the Liverpool Pride march passed through the city centre. The march, led by members of murdered teenager Michael Causer’s family, saw 2,500 of the LGBT community in addition to their friends and family flow through the city in a blaze of sound and colour.
At the Pier Head, Pride goers were treated to two stages, over fifty stalls, Zumba sessions, caged football matches and a whole host of street entertainment. On the main stage, acts including soul divas Rowetta and Kym Mazelle, accompanied by the Liverpool Pride Dance team from AJ Dance, blew the crowds away with stunning performances, the main stage line up also included Bears Aloud, whilst up and coming local artists including Oh My, Alan Cross and Cocabelle entertained the masses on the second ‘Summer of Love’ stage.
Photos: Sakura and Brian Plumage

PRIDE OUTLOOK
Sunday 25th September – Sunderland Pride
Sunderland is currently gearing up for the first ever Pride celebrations in the city. On Sunday 25th September thousands of members of the city’s LGBT community are expected to flood Park Lane where entertainment from artists such as I’m So P!nk, Envy and headlining act Scooch will be performing from 1pm. The event will also include a Pride march setting off from the Civic Centre at 12pm. Up to date information on the event can be heard on Pride Radio North East throughout the day and online via @SunderlandPride on Twitter or Sunderland Pride 2011 on Facebook. 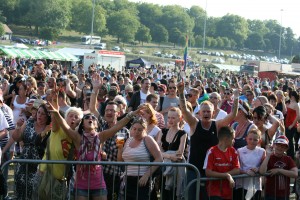 Nottingham Pride
It seems that the general consensus was that this was the best Pride in the city… ever.
The march was bigger than before and attracted a lot of support from those who simply watched it pass them by. Meanwhile, at the 3 stage area, there were enough stalls, eateries and entertainment to keep things fizzing throughout the day. Support from the mayor and a very camp looking Sherriff of Nottingham set the general positive atmosphere to the occasion, while the compares had us all in stitches as they looned around and introduced some really exciting star acts to the stage.
Photos: Amy Jai 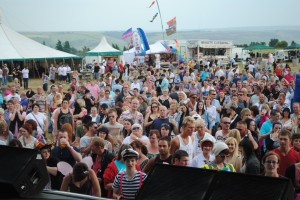 Pink Picnic
Huddersfield’s iconic Pink Picnic may have been held in the wilds of the moorland (some of us had trouble with our sat-nav systems finding the place) but once on site, there’s no doubt about it, this yearly event is something special. There’s nothing fancy or fake about the PP, everyone is out to have fun, even the entertainment look pleased to be there and not just going through the motions. The idea of the picnic is simply ideal. You bring what you want, be as down-to-earth or as fancy as you like, frock up in a way that pleases you and the general sociability of the event makes it a complete success. No wonder so many other events around the country have copied this wonderful occasion. 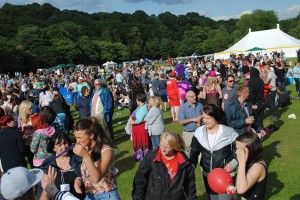 Sheffield Pride
Taking full advantage of the sunny weather, the city’s Endcliffe Park hosted this year’s Pride celebrations. Over 6,000 people took part in enjoying the festive mood as the theme of ‘ Pride Over The Ages’ nodded acknowledgement to the first such pride event in New York 40 years ago. Although having a party was the rule of the day, it wasn’t for everybody so the organisers included a quiet spot for poetry reading, afternoon teas and a special Rainbow Weddings tent. Meanwhile, festival goers could browse market stalls or just relax in the sun.
Photos: Grizz 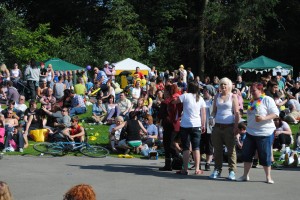 Well over a thousand people attended this year’s York Pride to laugh, sing and dance along with a wealth of bands and entertainers – and to shed a tear in a hugely moving tribute to David Kato, a gay rights activist and recent resident of York who was murdered in Uganda this year because he was gay.

With a rapidly increasing attendance and media profile York Pride has become the major event for York and North Yorkshire’s Lesbian, Gay, Bi-Sexual and Transgender (LGBT) community – and now attracts visitors from across a wide area, which this year included a man who travelled from Norway specifically to join the tribute to David Kato.

York MP Hugh Bayley and the Lord Mayor led a mass release of biodegradable rainbow-coloured balloons in commemoration of David Kato, to the sound of ‘We are together’, an African spiritual anthem performed by Gay Abandon, a sixty strong LGBT choir. The event is in its fifth year and as the event has grown so too have the activities over the whole Pride weekend. The main event in York’s Rowntree Park on 30 July (1-6pm) saw an exciting main stage line up of live music and cabaret headlined by Bears Aloud and the Dame Shirley Bassey Experience. The party continued afterwards at the Duchess in York until 3am.