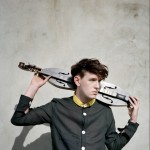 Gay, bisexual, ambiguous… call him what you will but this month sees Patrick Wolf take to the road to promote his latest single and up and coming album. The enigmatic Wolf mixes electronics and samples with a wide range of instruments including viola, keyboards, ukulele, and percussion, all of which he plays himself to form a fusion of jazz, folk and electronic music.

He began experimenting with sound and four-track recording at the age of 11, eventually building an arsenal of instruments that included junk-shop organs and a home-built theremin. He’s been in a pop collective (all very noble) and one half of a noisy duo called Maison Crimineaux with his friend Fanny. There is still a touch of the strange about an appearance by Mr Wolf but you should make the effort if he’s in your neighbourhood.

The new single “The City” is out on 14th March