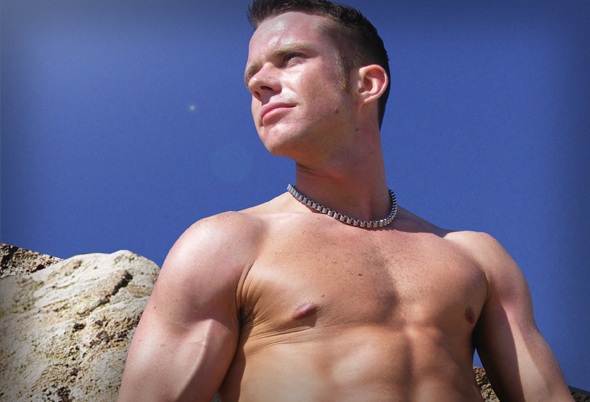 Maybe you know the feeling. There are days you just want to forget. Days when everything goes wrong and you wish you’d just stayed in your warm, cosy bed instead. Well, not only have I had a few of those days recently, I’ve had a few of those kinds of weeks. It’s just not been my month – or, to be a little blunt about it, the last month has been pretty shit!

It all started with my plans for a holiday. I’d planned to enjoy two nice, pleasant weeks with my friend on Gran Canaria, taking advantage of a nice finca near Maspalomas, which a friend had allowed us to use whilst he was away and which was only 20 minutes by car to a gay beach and the Jumbo Centre. A quiet and intimate location, with its own pool, that sounded just perfect for some personal time. Sadly, the volcano in Iceland put paid to all these plans!

Since we weren’t able to fly anyway, we decided at the last minute to jump into the car and drive to some island in the North Sea – the name of which, I’m afraid, I can’t remember! But instead of enjoying a gay beach, 25 degrees and cute twinks in tight shorts, we found ourselves in a family location… in the cold and wet.

Credit where credit’s due, however – we had a nice apartment with an open fireplace and a direct view of the open sea. But when you’ve looked forward to the sun of Gran Canaria, a German island just doesn’t seem quite the same. In short, it was disappointing. I wanted to jet-ski, paraglide, swim in the ocean. Above all I wanted a bit of adrenaline. However, what I got was a family holiday, with cold, rainy weather. As such, we only stayed there for a week, before going back to work. After all, sex in front of the fireplace is something we can have at home. What we’d been looking forward to was having sex in the dunes or at the beach – not to mention enjoying hot sunny days rather than damp miserable weather.

Then, in the following two weekends I had some more ‘STAXUS on Tour’ shows – this time in clubs that we haven’t been to before. I always enjoy these shows, as you probably know. It’s fun to spend some time with my colleagues in the best clubs in Europe, getting free drinks and staying in the finest hotels. Plus it’s great to have contact with my fans, with whom I can talk and party.

For these two particular dates we’d been booked for soft-core shows; that included dancing, stripping and some kissing, but definitely no wanking, sucking or shagging. As you’d expect from a professional outfit, everything is arranged beforehand, with a clear programme for the performance and hotel rooms booked by the club owners. On this occasion, however, a lot of things seemed to go wrong. When we arrived at the hotel we were told that they didn’t have any bookings for us, so we immediately called the club owner and he told us that he’d changed the reservations and that we now had a new hotel. As a result, instead of enjoying a 4-star hotel, we now had 2-star accommodation, which meant two single rooms instead of two doubles. Also the rooms were without an en-suite bathroom, which meant taking a cold shower on the floor below (the hot water didn’t work)! The glamorous life of a porn star.

It’s just not fair! I can only assume that some of these club owners think we are just some stupid young porn actors from the Czech Republic and as such can just treat us like shit! Not surprisingly, there was a rather heated discussion with the club owner after we found out – exactly the sort of thing you want to avoid after driving 700kms across Europe to get to the venue. But at the end of the day, what can you do? After all, what’s the alternative? To cancel the whole gig and drive back home, without being paid, and leaving a load of disappointed fans waiting for us? Or to cancel the club for breach of contract? No, you simply have to make the most of a bad situation and get on with the show, though one thing is for sure: we shall never, ever have another show in that club or indeed do a show that’s been organised by that guy!

To be honest, 99% of all our shows are really great fun and go without the slightest hitch, which is the reason why I like them so much. And why not? I get to attend great venues, have fun with my work-mates, have sex on stage (depending on the booking) and meet all my fans. What’s more, as the icing on the cake, I get paid for it all! What more could I possibly ask for?

I really hope that I can do some shows in the UK pretty soon. Indeed I’m already in contact with several clubs and venues. Let’s see what we can work out together over the next few weeks. I so much look forward to come to UK again – I always have a real licking… sorry… liking for British guys.