A touch too much? 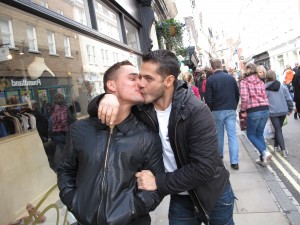 Recently I had friends from London and Brighton staying with me in Yorkshire, so I took them out for a day in the historic city of York.

One of the couples is young and very much in love. They’re relationship is still new and they couldn’t stop holding hands and kissing in public. Hardly anyone in York paid them attention. I saw one or two people nudging each other and pointing.  A young guy said to an old guy; ‘Did you see that?  They were kissing. That’s what it’s all about these days.’

When we came to Leeds it was a different story though. Lots of people were pointing and I was shocked that a city as cosmopolitan as Leeds doesn’t appear to be as open and accepting as in other places.

With all the TV soaps and their constant gay storylines, you’d think that a couple of boys holding hands (as girls don’t seem to attract the same horror) would create much of a stir at all. Is it because it is such a rare thing to happen? Is it just the sheer novelty of the occasion that attracts the whispers and the pointing. Maybe, but often from these whispers there is a more sinister undertone that is very disquieting.

I know a gay couple who have been partners for over 33 years and, unless under very gay circumstances, never hold hands in the street. They might kiss hello or goodbye in the car, but as for public displays of affection, it’s a definite no-no. When I ask them why, they point to the fact that they don’t need any trouble at their age.

It got me thinking about how more gay people should be expressing their love and friendship of each other and we should have an official day for holding hands.

When I looked into it further, I discovered there’s already an international hand holding day which starts in January and runs throughout the year. On this day, week, month or year, same-sex couples and friends all over the world are encouraged to hold hands in public to support the visibility of LGBT people.

Also, Sshh! Saturdays, which occur on the last Saturday of every month is a way of encouraging and inspiring LGBT people to take responsibility for their equality and live their lives without fear or restraint. Sshh! Saturdays in major Western cities will, it is hoped, become regarded as an important time when numerous same-sex couples can feel confident in holding hands and being themselves.

Last Valentine’s Day, students in Oxford formed a same-sex chain around the Radcliffe Camera, in celebration of friendship and gay rights. Instead of a boy-girl line, the participants held hands in boy-boy, girl-girl formation. But I know what you’re saying, it’s easy for students, they have nothing to lose. That might be so, but we can’t rely on Outrage and Stonewall or a few students to do all the work for us… sometimes, even in a small way, we need express our own feelings… and to feel less oppressed in our own country.

If you feel the same way, why not join the Kiss-In for Global Queer Freedom, which takes place at 2pm on Sunday 9 May, in Piccadilly Circus, London. They need hundreds of couples to join in.

This will be a re-enactment of the iconic OutRage! Kiss-In from the eighties and celebrates the 20th anniversary of the queer rights group OutRage! It was originally staged to protest against the arrest of same-sex couples for kissing and cuddling, and shamed and embarrassed the Metropolitan Police into ceasing to arrest LGBT couples for displays of affection.

This time the Kiss-In is focused on demanding freedom and human rights for LGBT people worldwide, especially in countries like Jamaica, Iran, Uganda, Malawi, Nigeria, Iraq and Saudi Arabia but it is also good for all of us to be visible.

Give us a Kiss!