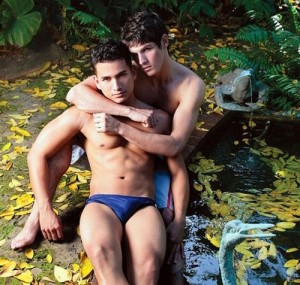 And the Gods smiled down      By Les Lea

Cam and Darryl had been best mates since they were kids. They had gone through nursery, junior and high school together and more or less lived at each others houses. They were so close and looked so similar that many people thought they were brothers. They played on the same sports teams; swimming and cross-country running being their favourites, though they could also be regularly seen kicking a ball about or picking up a bat for a game of cricket. Cameron, or Cam to his friends, was seventeen days older than Darryl, they had met on their very first nervous day at nursery when they were just 4 years old. Since then they had almost been inseparable with only some family outings splitting the duo for any length of time. As the one left behind would often pine for his friend, and the one on the trip would become moody, both families soon learned to make sure they invited the other along.

While at school they had both joined the Scouts and enjoyed the temporary lifestyle that the organisation offered. They frequently refused to attend family holidays so they could go on camping expeditions with the rest of the troop, although the main reason was so that they could be together. As youngsters, the idea that they were lovers never entered their heads even though they both would do anything for the other. A bond, a very strong bond, had developed between the two that other friends and school-mates could not penetrate (despite a few attempts by other boys and girls). Cal and Darryl were as One… you could almost have called them Carryl

On the Scout outings they often slept in the same tent with other lads but no one was allowed to sleep between them and even though nothing of a sexual nature took place, they needed that closeness to exist. As they got older and the fooling around got more sexual, the two friends would merely look on but not participate. However, whilst just the two of them were on a camping holiday in the Yorkshire Dales, all they had learned and seen from their peers over the years became more than just theory. One morning the young and inexperienced Darryl, feeling hornier than he’d ever felt before, slipped naked inside Cam’s sleeping bag. Cam smiled and welcomed the warm body of his mate next to him. Facing each other Darryl uncertainly searched his buddy’s eyes for a sign that he was OK with this move. As his best friend’s cock grew harder and pressed up into shorts covered groin, Cam just knew… it was time. They had been unintentionally avoiding this inevitable event all their lives but now seemed the right time and besides, he would never deny his best pal anything. So, strange as it may sound, after all this time, they kissed for the very first time.

That kiss lasted for ever… as both passionately fought to taste and respond to the other.  Giving way to both lust and happiness that their youthful bodies were about to enjoy. Both their young cocks strained for release and Darryl uncontrollably came all over the front of Cam’s boxers. Cam’s excitement also produced a load that mixed heavily with his lover’s and they spent the rest of the day in their tent repeating the experience. As the summer’s day drew to a close, they left the tent exhausted but happy and lay in each others arms by the side of the river where they had camped. Both were aware that this day had seen a huge change in their relationship and one that each welcomed. As the warm sun slowly settled in the west they held each other tenderly, lovingly on the grassy bank and had never been happier. It had taken almost fourteen years from when they first met to the point they were at now. That night, under the stars, they found an even deeper, more penetrating side to their love. With each breathtaking and revealing experience their devotion for each other was cemented all the more. This new, more intimate expression was what the gods had planned from that very first meeting when they were children… now they smiled down as they often do when two boys find true love in each other’s arms.