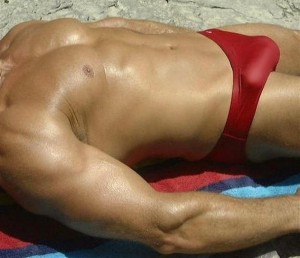 The temperature was in the 80s as I supped my beer and looked out onto the calm blue Mediterranean. It wasn’t yet full season so the beach was relatively deserted but, as I gazed down below me, I saw an absolute vision. Laid out and snoozing on the sand at the water’s edge was a young guy obviously enjoying the sun’s warming rays. He was perhaps late teens or early twenties and his already olive coloured skin told me his ancestry wasn’t from the Scandinavian countries. He exuded youthful healthiness and the fact that he appeared quite good looking as he slumbered made me take more than just a passing interest in this young man. His gorgeous, evenly muscled brown body was made yet more desirable by the coating of sun-oil that emphasised each mound and bump of his relaxed torso. The image reminded me of some superb shots I once saw on a calendar of a famous porn star, except this guy seemed so natural and, in many ways, far more erotic. A pair of shiny red swimming trunks neatly covered his genitals but it was interesting to see that while the lad dozed, his dreams became reality as his cock visibly pulsed under the silky sheen of the tight fabric. I was completely absorbed in every curve of the lad’s body. Each sculptured mass of his taut but trim muscles glistening under a sheen of sparkling beads of sweat glinting in the sunlight. I saw the man who looked after the ski-jets also taking an interest. He wasn’t bad looking himself, perhaps ten years older than this lad and equally as trim. His wet baggy Abercrombie & Fitch flowery boardshorts just clinging to his firm arse, while his broad smile was a fantastic welcome to any potential customer. In my mind I conjured up images of these two together, wrapped in an oily, sweaty embrace but as these thoughts were playing havoc in my own shorts I concentrated back on the scene in front of me. The slow rise and fall of the sleeping lad’s chest seemed to be as at one with the surroundings as much as I was. I got my camera out and decided I’d like to have record of this entire scene. I took several shots. A yacht floating in the stillness, a seagull circling overhead, the ski-jet man working on an engine but always returning to the fantastic image lying tantalisingly just below where I sat. Everything was so calm, the waves hardly lapping the shore at all, the air seemingly only filled with the buzz of insects. I think I was as relaxed as I ever could be… until I heard a different sound. I looked down at the slumbering figure and after a few restless moments a sudden shudder brought the young man awake. He shook himself from his sleep to the sudden realisation that a damp patch was spreading across those wonderful tight red nylon briefs, made even tighter by the not inconsiderable bulge his pulsing cock made. He looked tentatively around but didn’t notice me above him with my camera still poised, quickly got up and rushed into the sea to swim away his embarrassment. Thank God for Digi cameras as I had managed to capture each orgasmic moment: from the lead up, to the eruption and watching his cute tight arse rush into the sea. A memory I keep returning to on my computer and one I watch them over and over again. Taking pleasure in doing precisely what I wanted to do at the time, remembering the heat that the lad produced in me then and as his image on the screen was still doing now.