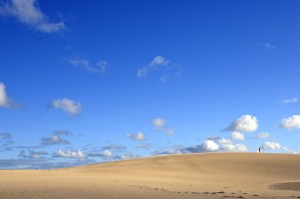 It might not be the biggest Canary – it’s second to Tenerife on that count – but Fuerteventura is definitely the longest, measuring 60 miles from Corralejo in the north to Punta de Jandia in the south; and is just 8 miles south of neighbouring Lanzarote and scarce 60 miles west of the West African coast.

Invaded by Spain six centuries ago, Fuerteventura’s current 80,000-strong resident population has become increasingly dwarfed, since the 1970s, by an invasion of tourists seeking its year-round warmth and sunshine – plus cooling, steady breezes, so perfect for wind- and water-sports. This influx has brought a degree of financial security, plus the odd maverick call for independence from the motherland!

One thought on “Fantastic Fuerteventura!”