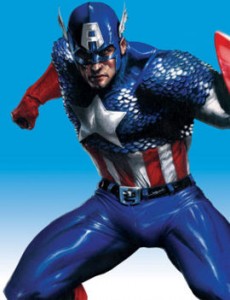 For some people the idea of holding out for a hero conjures up imagines of welsh warbler Bonnie Tyler on a cliff-top belting out a power ballad, yet for others it is the hope that a man in spandex will sweep them off their feet.  The fascination with hunks in Lycra, or superheroes as they are more commonly known, isn’t a new one, in fact super powered beef cakes have been saving the day for years.  They’re always on hand to flex their pecs and save a damsel in distress, yet where are they when a single man needs a boy wonder to help with the shopping or debate which X-Factor judge is the best?  At first sight it would seem that only heterosexuals are catered for in the lively world of comic-book heroes, but look a little deeper and chances are you will see why gay men are fascinated with super guys.

Take Batman for instance, one of the most successful characters in terms of the number of movies he’s had and yet also one of the most varied depictions of a hero in such a short space of time.  From Batman (1989) to last year’s Dark Knight (2008) the caped crusader has had more wardrobe changes than Cher and let’s be honest who else is going to appreciate the absurdity of Bat-nipples other than a gay man?  1997s Batman & Robin is a pure slice of queer cinema with its story about two men facing inner conflict, in a world where erotic statues define the city-scape, superheroes have chiselled torsos and where a drag queen (Poison Ivy) wishes to seduce and divide a happy male couple.  But if camp crusaders are not to everyone’s taste then the recent Batman Begins (2005) and Dark Knight have presented a more rugged Batman, a kind of James Bond meets Phil Mitchell offering a bit of rough in the Batcave.  This new daring dark knight is still the same tortured soul as before, he still likes to dress in black, but this one’s not likely to burst into tears if a glass of vino gets spilt over his cape.  He still might not be the right guy to take home to meet the mother, but at least he’s a snappy dresser and he has his own car.

Batman appeals to someone more comfortable with their sexuality, but the flipside to all this can be seen in the X-men series, a story about a group of mutants living in a world that hates and fears them.  This isn’t about a group of teens with ASBO’s however, but about finding out that not everyone fits into the world around them.  Alter the mutant angle ever so slightly and it becomes clear how a young gay man can identify with being feared and misunderstood by people who look and act just the same as them.  The second entry in the X-men trilogy, X2 (2003), touches on this the most and it’s easy to see why it becomes a metaphor for an awkward early gay life.  A scene, in which the mutant Iceman is asked by his mother if he ever tried not being a mutant, is a question which no doubt rings home to many of the audience watching, and presents homophobia in its most simplest form.  Much later the less than conspicuous mutant Nightcrawler asks shape-shifter Mystique why she doesn’t use her abilities to look like everybody else, she simple responds by telling him ‘we shouldn’t have to.’  X-men: The Last Stand (2006) ramps this up a gear with its story about finding a cure for being a mutant and asks the question if you could change who you are to fit in, would you?  It is a bold inquiry and it’s easy to see how the issue could fire up thoughts amongst a homosexual fan base, especially given that the biggest opposition comes from Magneto, played by the openly gay actor, Sir Ian McKellen.

Perhaps the biggest reason that gay men love the antics of costumed characters so much though is because of the element of disguise, which has always been at the root of the genre.  Through the art of quick change, mild-mannered reporters and freelance photographers can instantly become someone else.   Ok so they don’t need a membership for Virgin Active to fill out their jumpsuits, but looking good isn’t what it’s all about, instead it’s about reclaiming their own little space.  In the realm of capes and cowls a new identity is created, where someone who feels they have to hide, can suddenly have the world at their feet and be able to express themselves clearly.  Like a drag queen with lashes to die for and the right bit of lippy, the problems of the world can be shut out through the creation of the double life and it’s in this they can find their moment of strength.  It’s another identifiable element which goes hand in hand with homosexuality but the downside is that when hiding, a person is never truly comfortable.  Comics are designed to continue, a sort of paper soap-opera, meaning characters are never allowed to just be happy or the series would come crashing to an end.  Something always stops the hero living the life they imagine and it always comes down to trying to balance different elements of their lives whilst hiding behind a mask.  This practically screams out the life-style many gay men have had to deal with and so it really isn’t all that hard to see why there’s a lot of love and understanding for the superhero community.  After all Bonnie Tyler may have needed a superman to sweep her off her feet, but chances are she didn’t consider trying his tights on whilst he was out on his day job.