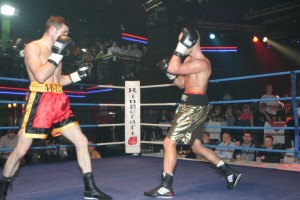 When I was a kid, I used to go and watch the wrestling at the local town hall. It was terrific seeing live (as opposed to just on TV), those guys, dressed in only a pair of briefs, grappling one and other to the canvas in search of a submission or a three count. I loved the lithe bodies and tight arses packed into that flimsy piece of nylon, although at the time, I wasn’t fully aware of why I spent so much time gazing at each wrestler’s crotch.

At one point I did actually contemplate taking up the sport but, guess what, as I got older I became more worried about touching another guy. At what point the idea of such physical intimacy scared me I’m not sure but it was then I metaphorically hung up my trunks and binned any plans to become a professional wrestler. I went off the sport completely when it seemed that the heroes of the ring had become all fat and showbiz and a belly flop could render a knockout with barely any skill involved.

Meanwhile, middleweight and lightweight boxers became my object of fantasy. I didn’t want to fight but I appreciated the style, stamina and commitment of my new gods of the ring. Again, for me, it was definitely a fetish thing. Apart from obviously adoring such terrifically toned bodies, I loved the look of the smooth though lethal leather boxing gloves but especially the shiny satin shorts, which to my burgeoning gay sensibilities became a symbol of manliness and sexuality. These days the shorts have become some kind of baggy parody of a clown outfit and I think it unfortunate that some boxers now look like they belong in a circus.

When WWF (now WWE) exploded onto our screens, I hated the show business element to it. I disliked the fact that we got so much chat and hype with not enough action, and I begrudged the ‘fact’ that it all appeared (albeit well) choreographed. It took me a while to find my ‘gay’ perspective to it and enjoy the absolute hunks throwing themselves around in the tightest of shiny PVC and god knows what other ‘come and f*ck me’ style of garment they seem to wear. These beefy blokes (cos small and lithe just doesn’t happen in WWE) really do know how to sell themselves… to everyone.

I know that gay wrestling is very big and my friend Chris Geary (www.chrisgeary.com) takes part in bouts in this country and abroad, as well as running his own specialist meets. There are gay clubs worldwide you can find on the net that encourage guys to get physical with each other; wrestling, rugby, swimming, football and a host of others… but I wondered… boxing? Not so long ago there was a trend amongst white-collar workers and city slicker types to get in the ring themselves and have a fight. It was a way to let off steam to ‘prove’ to themselves that they weren’t just a bunch of desk-bound softies but real men who could take the knocks.

Switch on the sports channels and you will now find Muay Thai, kickboxing and UFC style boxing on our screens and my love of the perfectly taut body and physical skill, together with my penchant for watching guys fight it out in shorts, is back as strong as ever. Despite the very violence these sports portray, the entire activity just screams homo-erotica to me and I wondered if others felt the same way. Is it merely the imagery that hooks people or is it the right-hook that folk are now keen to experience and, I wondered, are gay guys looking for that ‘real man’ experience themselves?

Jim, who is gay and has been a boxing coach for many years, offered this opinion.
There are no ‘Gay’ boxing clubs or groups other than Internet sites and Yahoo groups (as far as I know). There are people, especially in the States, who find the idea of boxing erotic. There are probably some here too. Equally, no problem, as long as no one gets hurt it’s a case of ‘different strokes’. It’s a VERY minority interest. To actually train for boxing is hard enough, to compete requires a total dedication of lifestyle, nutrition and training. It doesn’t fit the stereotypical ‘gay’ lifestyle. It doesn’t fit the typical gay man’s interpretation of training either. Going to a gym and bodybuilding is the complete opposite of how a boxer would train.
The question of whether gay men are getting more involved in real sport (competitive sport) as opposed to the cosmetic activity of ‘working out’ is an interesting one. I took part in three Gay Games and there are undoubtedly more gay people in Western Europe and the USA playing sport BUT it’s still a marginalised activity in gay culture and many young gay people, especially boys, think that competitive sport is not for them. Mostly the PE they had at school was so appallingly bad that they have never had a chance to experience sport in any real sense and think that going to the gym is sporting activity. It’s actually just another form of cosmetics!

Meanwhile Keith, who is a keen amateur boxer, offers his take on the situation.

It’s a subject that’s close to my heart as I have a life-long love of boxing and the question of gay/ bi lads participating in the sport is something which has long been uppermost in my mind for a long, long time. There are websites, which gay lads into boxing use, as well as those into wrestling in order to contact other guys into the sport. In my experience, many of them seem to be interested purely in the fetishist side of things; putting on boxing gear and getting into hot, sweaty clinches with other guys in order to satiate their needs. Most don’t want to box or are hopeless at it. However, I have also met guys who want to meet for private matches and who have a good grasp of boxing techniques. And again, there are some guys who merely want to be beaten to fulfil a sado-masochistic desire.

I went to a local boxing club as a boy and I have friends in the sport, both professional boxers and amateur coaches. Most know that I’m gay and it’s simply not an issue for them. Some have even confided in me that they’re bi-curious. My closest friend is bisexual and boxed both for an amateur club as a teen in the North West and in the armed forces. So there are gay and bisexual guys out there who do box; they’re just not obvious in the vast majority of cases.

What also interests me is the fact that there are very real homoerotic undercurrents in boxing itself. Many of the motions, which fighters go through in a contest, are very similar to homosexual encounters; the close clinches, bodies pressed together, covered in sweat.

I’ve also had a pro boxer friend once say to me in these very words: “I dunno if it’s kinky or what, mate, but I love the smell of sweat and leather down the gym.”

I think that countless of us can appreciate that sentiment but at the beginning of writing this item I was hoping to find, not unlike the Brad Pitt movie Fight Club, an underground, secret organisation of gay lads hell bent on venting their aggression in the ring. I was also hoping that it would lead to a gay boxing superstar coming to the fore that we could all support as he took on his ‘straight’ opponents. I realise it was my own fantasy that drove me down this route and I hadn’t taken into consideration just what it takes to be even moderately good at this sport. I am in awe of boxers and I’m sure there are gay boxers all over the place but I think that their sexuality is perhaps the least important part of their personality.

One thought on “Fight to the fetish – by Les Lea”