Priscilla Queen of the Theatre 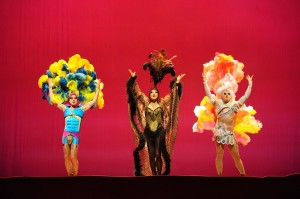 It’s very rare to walk out of a theatre with a huge smile on your face and a spring in your step, but along with moving you and making you laugh till you almost wet you

rself, Priscilla Queen of the Desert – The Musical does exactly that. Admittedly, I think people have had reservations about this Oscar winning classic movie being turned into a show, but doubters, fear not, this is a destined to be an absolute hit and run for a while to come. For those of you who have never seen the movie, and shame on you, this spectacular show “tells the hilarious and heart-warming story of three friends who hop aboard a battered old bus (named Priscilla) and take their show to the middle of the Australian outback. These larger-than-life characters go in search of love and friendship, but end up finding more than they could ever have dreamed!”The bus, Priscilla herself nearly steals the show, but the three leads are fantatsic, in fact the whole cast is wonderful. Jason Donovan is wonderful as gay man and drag queen Tick, who is looking to meet his son for the first time ever. Oliver Thornton is fabulous as the high camp high drama queen Adam, who has an obsession with Kylie Minogue that leads to some amazing re-workings of her songs. For me… it was Tony Sheldon who stole the show as Bernadette, a post operative transexual who has possibly the most laughs, tears and emotional journey. With costumes that are quite out of this world, lots of glitter, disco balls, a story with heart and songs such as ‘Don’t Leave Me This Way’, ‘McArthur Park’, ‘Finally’ and ‘I Will Survive’ you will be dancing, laughing, crying and leave with that ‘feel good’ factor as well as pride in the fact that your gay… we promise you!