Can We Be Your New Gay Best friend Liz McClarnon

We sent Simon Savidge, our man who can, to meet the Pop Princess and former member of Atomic Kitten as she gears up to release a new single for the Global One Project and see if he can win her over and become her new gay best friend. 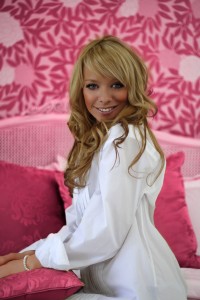 Oh my god, there’s loads I am completely camp. Ooooh I know. The campest thing was when I was invited to Mariah Carey’s Halloween Party, and rather than just buy a witches costume I went and borrowed a huge 18th Century proper out-there ball gown and huge tall wig from the BBC wardrobe. I turned up and everyone ripped the piss but I thought oh stuff it, I mean there outfits were really obvious. Anyway, Mariah saw me and made me sit with her… she was dressed as a mermaid, that’s camp isn’t  it? Was she nice… oh you love a gossip I can tell, actually she was. (Giggles) There is something else… I do the dance routines to Atomic Kitten songs in gay clubs I was doing that a few weeks ago.

10/10 Simply for sitting next to Mermaid Mariah dressed as a Princess it’s almost too much, as for dancing drunk to an Atomic Kitten song or two – we’ve all been there haven’t we? Most Saturday nights actually.

Do you have any diva demands?

Erm… I used to add naughty things on the rider, like knickers and stuff just to see if people actually would do them on our bidding. We once asked for only red Skittles and they did that too. You wouldn’t think they would but they did. Would I want puppies… like Mariah? She had lambs once, why would you want lambs? I like me Champagne but I don’t have many demands; I am a bit shit I need to sort that out.

7/10 For trying her hardest to see what she could get, but really we expected, in fact demand more. We loved the lamb Gossip, does Mariah sacrifice them or something?

I have to say Primark actually. Mind you actually last time I was in Primark some woman hurt me… seriously, I got elbowed in the face in a fashion stampede. I go in quite a lot as I live not far from the big one in London. I saw this gorgeous coat for bloody eight pounds went to grab it… and got an elbow in my face! I just turned around and walked out in a slight mood.

9/10 For honesty and the fact that she has almost been maimed in the quest for bargain fashion.

When was the last time you had a massive diva strop?

Oh not long ago at all. (Laughs) It definitely happens once a month! I am hormone central and you don’t wanna mess with that. (Gasps) Oh I know… on Ant & Dec because I wanted to throttle Lily Allen. She was so rude. I was walking round kicking off about it Yvette Fielding had to hold me off . Seriously Simon, when have you ever heard me slag anyone off?

9/10 We would give her ten but even we are smitten with Lily and her evil ways a little too much at the mo. However, Liz doesn’t slag anyone off, ever, so for her to let rip was impressive. The idea of Yvette Fielding holding her back from a fight is also too camp.

Funny you mention that (laughs) but yes I do. I love it, that’s my main staple. What’s the best gossip I have ever heard about myself? A while ago I heard I was pregnant! Did you know, when I split up with my ex it was on the news in Asia… isn’t that weird? I’ve not been accused of being an alien or anything that far out… oh hang on one of my ex boyfriends did actually. I don’t like horrible bitchy bitch gossip, I love a dark juicy factual scoop though. Love that.

10/10 The fact it’s her main staple… it’s also true, we couldn’t print some of the things that we discussed!

Oh you see you’re just not playing fair, I mean really that’s not fair. I would have to say Madonna… mainly because of her fella; he’s a beautiful boy isn’t he? It’s all about the boyfriend; I mean Kylie’s new one is cute but nothing on Madonna’s. Kylie is cute and sweet, which I like but I also like the grittiness of Madonna.

10/10 Sod the ladies it’s all about the men they can pull and we have to agree we would do Madge’s fella over the Minogue’s… though it’s a tight competition.

What’s your favourite put down line?

Oh that’s easy “you’ve just wasted oxygen” I say that quite a lot.

8/10 For the speed that it was delivered.

I would say you can never have enough… but I think if you only have gay friends as a straight female then that’s a little bit weird. Not one straight friend then I think you might have a problem. You know that’s a bit heterophobic isn’t it? I do have more gay friends than straight friends but it’s not just you fabulous gays.

9/10 She loves the gays. Deducted a point as it wasn’t all about us  and as every gay man knows… it is all about us.

If you could be, which girl band would you be in now?

Ooh, that’s a really good question. I think it would have to be The Saturday’s I love them (goes all dreamy). Oh no I would, love, love, love to be in The Saturday’s. I wouldn’t be in the Sugababes… I was in a band with Heidi, hmmm moving on, I don’t think she likes me anymore. It was me, Kerry and Heidi and we were called Mayhem, Heidi left to be a solo singer, which is interesting. I like Girls Aloud; if I have to have a favourite then it would be… Kimberly. Will Atomic Kitten ever get back together… sadly no. We are still mates but no. Sorry!

9/10 Didn’t unleash some girl band hatred but we have to agree if we couldn’t be Cheryl Cole and her destined solo career we would so be Frankie in The Saturday’s – very possibly the next Posh Spice.

81/100 Yes we love the McClarnon and the McClarnon loves us, in fact we have now become the height of friends in 2009 – yes we are facebook buddies! We are smitten with the girl once of Atomic Kitten.

Liz’s single ‘Lately’ is out now.