Lay me in Lanzarote!

OD’d on Gran Can? Adrian Gillan gets sweaty on volcanic Lanzarote, the northernmost Canary! 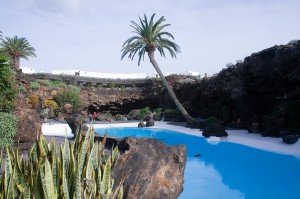 You’ll soon discover that this seemly barren island idyll off the African coast is, in fact, highly fertile!

Yet, if sun and sand aren’t your every thing, other – equally natural – attractions abound. Seven sites stand out, managed by Lanzarote’s Centres of Art, Culture and Tourism, in no small part preserving and promoting the work of arguably the island’s greatest son: aritst, architect, planner and visionary, César Manrique (1919-1992) who persuaded the powers that be and – most significantly – the local people themselves of his philosophy that man should build low and design aesthetically, so as to maintain an essential harmony with nature. The “seven centres” can be reached independently by hire car, or via regular coach tours from major resorts: