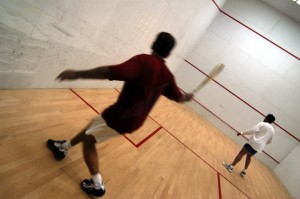 Since I was at school I’ve always had a thing about guys in sportswear. I remember even as a very young boy getting excited changing next to all the other lads in the locker room. All those cute little bums running in and out of the showers and the sports master making sure we washed ‘everything’ after a sweaty game out on the pitch. I particularly loved it when we all climbed into our underpants; lovely little arses sliding into white cotton that gripped tightly. Now I’m 18 and have left school I’ve joined several sports groups really to keep myself involved with athletic and horny guys – the type of spunky guys I go for.

My latest sports group is the best because of what happened the other night. I played squash with this guy, who’s about 10 years older than me; black, very fit, quite sexy and wore an unbelievably tight white Nike kit of shorts and shirt that was an unbelievable contrast against his dark skin. He looked like a winner even before he stepped onto the court. We played six matches, all of which he won easily but he made a game of it and had me running around the court like a man possessed. By the end I was worn out and sweating like I’d got an internal fountain going on. It was getting late and we were the last to play on the court but after the game he told me to stand still to get my breath back. As I stood gasping against the enclosed court wall, and feeling the dampness soak into my shorts, he was smiling and looking me up and down. The lights in the court were movement sensitive and the court was suddenly plunged into darkness, all I could make out was the vague outline of his luminous kit. He immediately reached over and put a hand on my chest. “OK” he said “fancy a new game?” I knew what game I wanted to play and was extremely happy when I found out it was the same one he did. That hand stroked down the front of my shorts and began to fondle my crotch. My cock was hard in seconds and as my own fingers explored on their own… I found that his bulge was hard and demanding. He moved slowly and deliberately so as not to re-ignite the lights and pulled down my shorts. My God, the sensations were incredible as in the darkness his hands made every bit of my body tingle with excitement and expectation. My hardened cock reacted to his careful stroking and was ready to shoot in seconds. His thumb tweaked my piss slit and set off a sudden series of involuntary shudders coursing through my body. His hot mouth found my cock and engulfed it in one long deep suck and as he plunged down the length for a third time I could hold back no longer. I let loose the volley of salty semen I’d been desperately holding back and with a huge, relieving moan emptied my full ball sack down his throat. He used his hands to grip my arse to make sure every last drop was shot into his mouth… then he slowly turned me around to face the wall. He used my own cum to lube up my arse hole and after a few minutes of rimming and deep tongue probing he stood up and rested his hips against mine. I could feel the hardness in his shorts against my naked butt and it wasn’t long before he’d released his imprisoned cock and let it press up against my cum-slicked crack. The pressure increased and I was flattened against the wall of the court as my hole was slowly prised apart. I panicked as the width suddenly became apparent and tried to wriggle free but this only made his cock slip in further. I squeezed my eyes and my butt tightly as he forced his way in, desperate to hold back the pain that was mounting but he was insistent and pushed on in. I desperately wanted to get out of there but his hips worked a miracle and managed to force that big fucking black cock all the way in. He held it there for a few moments as I tried to get used to it. “Well done my boy.” He whispered in my ear. “Now you’re going to get an injection of black currant juice… that will make us both feel better.” For the next ten minutes his cock worked in and out of my hole in smooth, long and satisfying strokes. My arse was on fire but I was loving it as that big thick dick reduced me to a whimpering cum catcher. As he speeded up he moved one of his hands down to my butt and I could feel him trying to insert a finger alongside his cock. I was already on the verge of cumming again and this extra addition to my sensitive butt hole had me spunking up instantly. As my arse ring clamped in the throws of orgasm he yelled out and with half a dozen hard quick thrusts gave me that boost of vitamin C he’d promised.