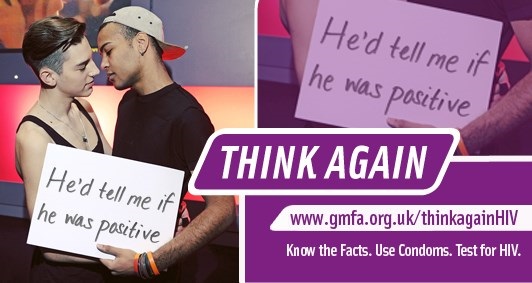 A third of these men were in their teens or twenties.

In April this year, GMFA launched the ‘Think Again’ campaign, encouraging young gay men to reconsider what they knew about HIV and sexual safety.

In the two weeks since the campaign was launched:

And there’s still more to come. Over the next few weeks ‘Think Again’ will be appearing in more of the gay press, on posters in gay bars and, from July, on bus shelters in Clapham, Shoreditch, Vauxhall and Dalston.

GMFA currently receives no financial support from local or national Government for its HIV prevention work. The ‘Think Again’ campaign has been solely funded by the support and generosity of individuals from the gay community, and the men and women who value this community.

If you would like to support the Think Again campaign and our future campaigns by making a donation, please visit: dating in rancho cucamonga .

GMFA campaigns currently in development include work for gay men who have chem-sex and a campaign to address HIV-related stigma.