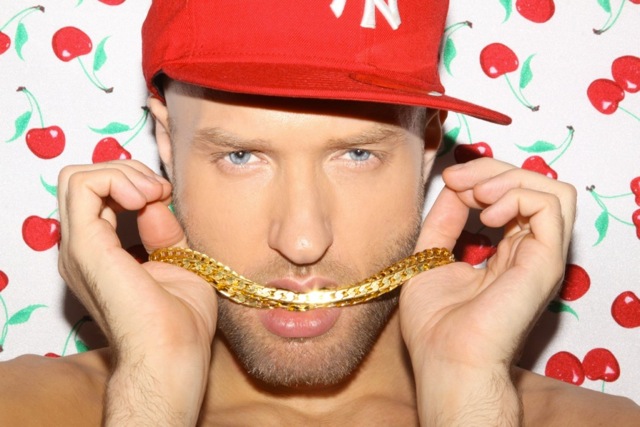 The next hilarious single from superfly gay rapper CAZWELL pokes fun at America’s (and the worlds’) obsession with the selfie (the cellphone self portrait).  “NO SELFIE CONTROL” and its accompanying music video releases worldwide on Tuesday.

It has gotten so that a teenager cannot simply go to a concert without holding his or her iPhone in front of their face and impersonating a duck. Then world, and America in particular, has gone crazy for the selfie, with teens, celebrities, and even the Oxford English Dictionary embracing the cellphone self-portrait. The motive is almost always the same: to let the world know where one is, what they’re doing, and how good they look. It’s the newest form of narcissism, and Cazwell’s latest hip hop dance track, ‘No Selfie Control’, is capitalizing on the craze with hilariously catchy lyrics set against a minimalist retro-funk track and smooth playa beat. Says the rapper, “’No Selfie Control’ is a heartfelt track that was written for everyone on Instagram that is in love…with themselves.”

People have been taking photos of themselves and sharing them with friends, family and strangers on the web for years. Yet it wasn’t until 2012 that a name for these self-portraits, often snapped at odd angles with smartphones and distributed via social media or texts, really hit the big time.

“It reflects our ever-growing need to be viewed as popular and attractive,” asserts Cazwell, a Massachusetts native; himself, a product of the internet age. He became a Youtube sensation after a million people in a single week viewed his ‘Ice Cream Truck’ music video.   He has since earned hipster credibility with a steady flow of danceable hip hop tracks − including ‘Rice & Beans’ and ‘I Seen Beyoncé At Burger King’ − that impressively showcase his hypomanic take on pop culture. Cazwell has been described as “what would have happened if Eminem had grown up on Madonna’s front lawn.”

‘No Selfie Control’ is his first collaboration with up-and-coming Viennese producer Dizzy Bell.  In it, Cazwell sings, “If you could see me like I do, you’d be in love with me too.”  Though meant to be funny, it’s an accurate reflection of a generation that has become obsessed with attracting the spotlight.  No attention is bad attention, except for, well, no attention.  One of the main ways to attract followers, especially among males, is wearing minimal clothing that shows off an impressive physique.

Even Cazwell flashes his bod in the song’s music video, directed by Athena Maroulis.  He doesn’t deny that it’s done to get more people to view his video.  It’s even why he brought in Maroulis to direct. “I worked with her before on my Here-TV ‘Boombox’ show and on my ‘Rice and Beans’ video (directed by Marco Ovando).  I knew she understood the sex/comedy approach I wanted to take for this song.” He also aims to tackle subjects that speak to today’s culture but haven’t yet been addressed in popular music.  Like selfies.