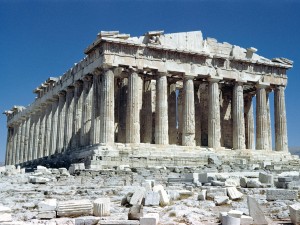 Outside Egypt and the Middle East, perhaps no other city can lay so great a claim to being the cradle of “Western Civilisation” as Athens, whose 5th Century BC “Golden Age” (philosophers like Plato and Aristotle; dramatists like Sophocles, Euripides and Aristophanes etc) sowed the seeds later nurtured and morphed by the Romans and all major Biblio-Judaic offshoots.

Athens’ intrinsic cultural richness has, ironically, stood the test of time, surviving its myriad then-seeming all-conquering invaders – from Romans and Byzantines, through Ottomans and Venetians, to the establishment of a modern independent Greek nation, which itself has witnessed German invasion, then liberation, followed by civil war, a junta and eventual evolution – well-nigh full circle – into a democracy the Ancients would well half-recognise, along with the 2004 Olympic Games!

EU membership and the thankfully waning sway of a repressive, chauvinist and ultra-conservative Greek Orthodox Church – that was frankly making the Ancient Greek Heroes groan and spin in their graves – have led to a recent renaissance in the Greek arts, and the resurgence of more gay activity than these wise old hills can have probably witnessed since, oh, around 500BC.

Greater Athens is now home to around 4 million, a third of Greece’s entire population.