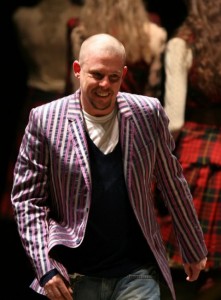 Born in Lewisham in 1969, Alexander McQueen was only 40 when he committed suicide, allegedly because he could not come to terms with the death of his mother a few days earlier. In his time at the top of the fashion food chain he was courted by many fashion houses and beloved of celebrities from around the globe. Known for his stylish, though often unconventional styles, he gained a reputation for his shock fashion tactics yet won British Designer of the Year on four occasions. He said that he knew he was gay at 6 years-old and spent many happy times in those formative years designing and making dresses for his sisters “I was sure of myself and my sexuality and I’ve got nothing to hide,” he said, “I went straight from my mother’s womb onto the gay parade”
His talent and innovation will be sadly missed.