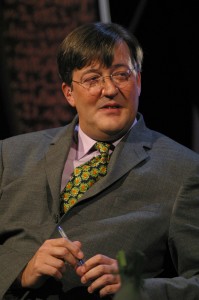 He comes from a family of thinkers and doers, his father was a physicist and inventor and a relative was offered the throne of Albania.

Fry struggled to keep his homosexuality secret during his teenage years at public school, and was celi

bate for 16 years. When asked when he first acknowledged his sexuality, Fry quipped: “I suppose it all began when I came out of the womb. I looked back up at my mother and thought to myself, ‘That’s the last time I’m going up one of those.”

He was expelled from sc

at the age of 15 and at 17, spent 3 months in prison for fraud after stealing a family friend’s credit card.

He later went to Cambridge University and gained a degree in English Literature, he also joined the Footlights Review, a Uni-inspired comedy group that had, over the years, produced some of the best comedy talent in the UK… members of Monty Python were just some of its ex-old boys.

Cronies of Fry’s include Kenneth Branagh, Emma Thompson, Tony Slattery and of course, Hugh Laurie (House) with whom he teamed up with for a ‘Bit of Fry and Laurie’. The show ran for several series and introduced the clever word play (and obvious love of language) for which Fry was to become famous. They also had a terrific penchant for dragging up.

He is bipolar, which

can often take him into the depths of depression at a moments notice. He c

ites this as the main reason he fled to abroad when he was about to open in a West End play called Cell Mates. He was later found in Belgium and didn’t quite understand why the papers were full of phrases calling him “A National Treasure.”

He was the obvious choice when casting for the lead in the movie Oscar was announced. Few could see any other actor playing the part and making it convincing.

He’s a prolific writer with several novels to his credit, as well as plays and adapted the musical, Me and My Girl for the West End. More recently, he has become a real TWIT, leading the way for the latest technical info portal – twitter.

He has appeared in many of the best-loved TV series in the UK including the Blackadder, Jeeves and Wooster and as host of the quite interesting comedy quiz show QI for which in 2006, he won the Rose d’Or for “Best Games Show Host”.