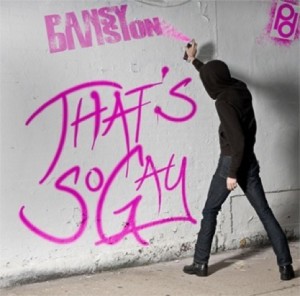 “We’re the butt fuckers of rock and roll; we want to sock it to your hole”

With these words written in a note book Jon Ginoli set off on a journey of self discovery and musical passion to become the founding member of Pansy Division, the first out and proud queercore punk rock band in the USA.

Jon Ginoli was a young gay man from small-town Illinois but had his heart set on being a musician. The only thing was he loved punk and rock but all the gay bars, and the few gay people he knew only seemed to be into disco. So, frustrated by the lack of openly gay musicians on the indie rock and punk scene he set off to try to pull it all together in the freedom capital of the world, San Francisco. To begin with, not all went to plan. It was lesbian and feminist bands that seemed to leading the way but eventually Jon was able to gather like-minded musos with a love of rock music and upfront gay lyrics, to form Pansy Division as a recording and gigging band.

According to Jon’s book Deflowered – My Life in Pansy Division, the name came about as a bit of a piss-take from a poster he had at work about the German Panzer Division. That, and his love of 60’s pop and 70s punk with its in-yer-face style and lyrics, excited him enough to see it as a credible alternative to what was happening at the time on the US music scene. Their first album contained songs all about gay life, observed through Jon’s eyes. Tracks like; Boyfriend Wanted, James Bondage, Groovy Underwear, Nine Inch Males, Beercan Boy (yep – in praise of the size of a tricks dick) and Smells Like Queer Spirit… all brought queerdom to the public’s attention.  With a new album called ‘That’s So Gay’ the message, which started back in 1991 when the band first gained some attention, continues to thrill fans and enlighten the public alike.

Talking on BBC Radio, Tom Robinson said: “To this day, their back catalogue remains hugely liberating for any gay music fan who has grown up immersed in het pop, macho rap and metal posturing of Western culture. Their riotous celebration of male-on-male sexuality remains a unique achievement in pop music history.”

When asked if they thought that singing about sex (and casual sex) reinforces negative stereotypes about gays, their response is still very matter of fact.

“We aren’t gay propaganda – we sing about the joys of sex, but also the frustration of loneliness (which is universal, queer or straight), and about our gripes and frustrations with gay culture. We are pro-sex (and vocally pro-safe sex) but I think we give a balanced view. We think that being blunt and upfront about our sexuality is something that makes us unique and interesting. Our reputation is based on more of the sex-oriented songs; we definitely have them but we have other types of songs too.
Also: it’s still important to counter the right-wing fundamentalist propaganda that portrays gays and lesbians as immoral by being open and out and relating our stories and experiences.”

Although Pansy Division is touring the US, there are no plans now for a visit to the UK.

Album out now: That’s So Gay