Scots born actor David Paisley returns to the stage after a break of nearly three years in the tenth anniversary production of The Backroom. Bent caught up with him at rehearsals to chat about the play and the controversial characters he has portrayed on television. 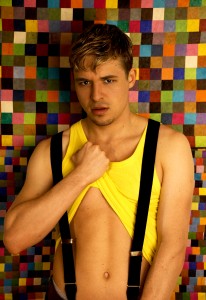 Tell our readers about your new play.

It’s called Backroom and it’s set in the backroom of a male brothel in Earls Court. ‘Seven prostitutes – five weeks – one brothel’ that’s the tag line and I play Gary who kind runs the place. It’s not his but he’s the sort of boss of everyone else… though he’s not very good at his job. He’s an ex rent boy who has got lumbered with running the ins and outs of it all. It’s a comedy, a romp and sexy … yes… a comedy sex romp.

How much did you know about male brothels then before you took the part?

(Laughs loudly) Now that’s a very leading question. I have never been in one myself but I do have a couple of friends who were sex workers

So you don’t…but you know a man who does?

OK, how much research have you done?

Actually, quite a bit because I was involved with a theatre company who were developing a film about male prostitution, so, I got to know quite a bit about it.

So is it a family show?

I wouldn’t say that (laughs). I wouldn’t bring your 5-year-old niece or nephew to it. There is a lot of bad language and nudity going on… as there is in the sex industry.

Is this only going to be seen in London?

At the moment yes, as it is the 10th anniversary of it and they want to see how it goes here first… but it would be nice to do a bit of a tour.

Back in 2000,you were one of the young stars when a Scottish production for television hit our screens, Tinsel Town. It created a bit of a stir and was pretty groundbreaking then. What did you think about it?

I suppose it was. It was a real gift for me, as it was my first major job when I was young but working with the company up in Scotland was a very safe environment to do all the sex and drug scenes we had to do… because I’d never taken drugs or anything like that. However, my character did so; I did a lot of research for that. I suppose it was groundbreaking because what we did 10 years ago… programmes like Skins are picking up on now. I played quite a young teenager going out and getting quite debauched… it revealed a side of clubbing that hadn’t been seen on television until then.

Then there was your other subject matter… the fact that you fancied a lot older man.

Yes, I suppose so… I played 17 year-old Ryan and my boyfriend was a 37 year-old copper – a  bit of cross generational love.

Well it made us all watch.

(Laughs) Good, good. Stevie Allan, who played my boyfriend, was wonderful to work with. We did a play together later on and he ended up stabbing me to death on stage. One-minute lovers the next… ho hum.

David also created quite a stir when he played gay mid-wife Ben Saunders in Casualty spin off Holby City, his part demanded that he kiss another bloke and the resulting footage brought a horde of complaints to the BBC’s door

I thought the reaction was hilarious… though I was pretty angry with the BBC as we had a lot more scenes planned and they all were cut. I thought they should have had more about them than to pander to bigots. I think it’s a terrible indictment that two men being affectionate to each other should offend people.

You were one of the first openly gay actors… was that a difficult thing to do?

I suppose I was, people then, especially young actors, used to skirt around their sexuality. Older actors were out and established… and it was OK… but if you were new to the industry, many people would tell you not to talk about it. I didn’t really have a problem with it but some did and still do. When Will Young came out on Pop Idol, it was important and actors like Jeremy Sheffield from Holby City, who still played the romantic leading male, proved that you could be an out gay man and play those kinds of roles. To me it has never been an issue so when the press asked if I minded kissing a man I’d say “No… but my boyfriend did.” My family have always been supportive and really, it was such a non-event when I came out I didn’t feel it was an issue. So, I didn’t think it would be an issue as an actor. I thought, Why should I hide away this element of my personality… it doesn’t effect my acting. Neither does my eye or hair colour.

And the final question, what style are your favourite underpants?

I quite like American Apparel… their little briefs are quite nice.

The Backroom: On now until 11th April