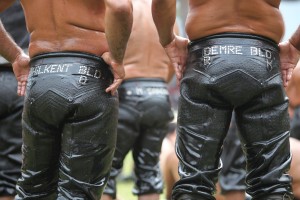 Half naked men grappling in the Turkish sun, the light glistening from their oil-coated bodies; hands grab slick flesh as they tumble on the ground clad in only tight fitting leather trousers. No, I haven’t stumbled across the set of the latest R18 movie, but an ancient sport which has been practised in Turkey since the 17th century. The Turkish Oil Wrestling Championship, or Kirkpinar, takes place in the small and relatively unheard of town of Edirne, which is around 2 hours from Istanbul by car. I had been to the competition a couple of years ago, but had heard it had grown in size and was keen to see more!

This year I found it much more populated by foreign journalists and photographers – The President of Turkey was also there – surrounded by heavy security. A BBC crew with 3 Blue Peter presenters took part in the wrestling too but the officials weren’t happy about this as they take the contest so seriously and felt the BBC presenters were taking it too much as a joke.  It will be broadcast in September apparently.

It’s impossible to ignore the homoeroticism of the event, both on the competition field and off. The competitors help each other to apply the olive oil which is used to foil their opponent’s grasp; they wait for their round with their heads on their friend’s laps; they stroke each other’s hair and walk arm in arm. These shows of affection between men however are commonplace in Arab countries where homosexuality is a crime. Despite this, the competition is a distinctly masculine event, so much so you can almost smell the testosterone on the air. Very few women can be seen at the stadium, with the audience made up of all generations of men supporting their champion. Each match is taken very seriously, particularly by the really younger contestants who when defeated fell to their knees in tears.
Each bout of the contest takes place to the constant rhythm of banging drums and music, which plays continuously for around 8 hours. After their match, the wrestlers wash themselves down and laze on the grass waiting for the ultimate champion to grapple to victory and receive the prize, either money or a ram. The rules differ to regular wrestling and one of the easiest ways to beat your opponent is to get your hands down the back of their leather trousers and pull! These trousers look like motorbike leathers, but in fact date back hundreds of years.

The Kirkpinar Festival takes place every year at Edirne in a week between the end of June and the beginning of July, The oil wresting championship is the highlight of the last three days of the festival, which includes a beauty contest, food competition and various shows and exhibitions. I felt honoured to be able to attend this ancient competition which makes tourists feel very welcome, and will certainly be returning in years to come.

I’m working on an exhibition featuring many photographs from the Festival, watch this space or email me on Terry@bent.com for more details.

To see more photos from this event click Here.