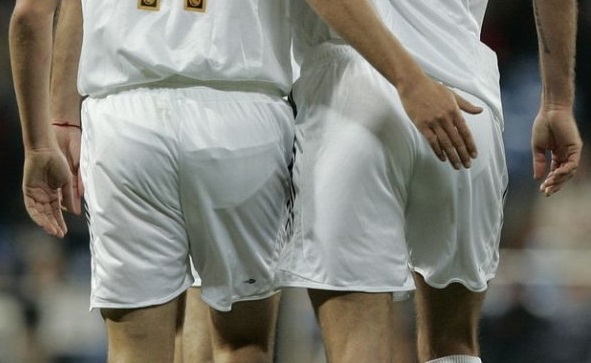 The Boss was going through his pre-match pep talk. Nerves were tingling and one or two of the team were going through their usual rituals. Superstition, for some reason, is rife in Premiership football. Some players insist on putting their boots on in a special way, not putting their shirt or shorts on until the very last moment, or saying certain things before they leave the tunnel. One thing was always the same, the nervous energy that charged through the entire ground prior to kick-off.

Down in the visitors changing room they could hear the chanting coming from the stands and although they were the visiting team… it gave them a lift. The adrenaline was flowing freely and just before the referee called them out onto the pitch two players, John Mae and Billy Ryan tossed a coin… this was the prelude to a little game of their own. It involved one of them “representing” the opposing team and just who did that was decided on whoever’s dressing room call coincided with the toss prior to kick off. The rules of the game were simple. If their own team won the match one-nil, the opposing team “representative” got shagged once, if the score was the other way round, then he did the stuffing. In a high scoring game the action could get really wild and, depending on how randy they were, how soon after the match payment was due. In the past shorts had been ripped off before they’d hardly reached the dressing room.

John and Billy had had this arrangement since they played together in the junior team. The original idea was to alleviate any post game depression if they lost, and to give an extra dimension to the natural high that followed a win. As they both progressed into the first team and the big time, they saw no reason to change this arrangement. In the earlier days other juniors had sometimes joined in the celebrations and on one such fantastic occasion the showers were a mass of steamy, shiny, sweaty young bodies, heaving mud streaked thighs, erect cocks and full arseholes. Over the years though some players had drifted away or been transferred to other clubs. Some had simply never made the grade leaving just John and Billy from the original squad.

Billy was the league’s top goal scorer and was the only capped player in the team. He was very popular for interviews because he was coherent and humorous. His exceptional good looks, blond hair, blue eyes, in fact the archetypal Greek God, didn’t hinder his ever growing fan following outside football either, and he was in as much demand as a pin-up as any current pop or film star.

John, on the other hand was dark (his mother and father moved over from Tobago when he was just a small child) slightly taller than the striker and an unscrupulous defender. Fans thought him a brilliant “wall” as very little got past him. Opposing fans and players alike thought him an animal, the way he hacked down any advancing forward.

Out on the pitch the referee tossed the coin. The home team captain called and as it landed Billy signalled that John was the opposing team “rep”. As the whistle went for kick off, the roar from the crowd followed and propelled them into the first forty-five minutes.

At half time the home team were one-nil in the lead and Billy’s team trooped back dejectledy to the changing room. Oddly enough it had been caused by a bad back-pass by Billy, something he didn’t normally do, and it had given John no time for a tackle on the other team’s number nine who went on to score.

It was a stupid mistake and John was furious with it. By the time he had reached the changing room Billy was laying on the table, his shorts were down and the team physio was massaging an ugly red studded mark on his backside. The site of Billy’s firm white arse being massaged and rubbed made John’s cock rise (as usual) in response and as soon as the physio had finished he pushed Billy towards the tiled shower area. He didn’t waste time, shoving Billy back to the wall with one hand while pushing down his own shorts with the other. They both could hear the Boss in the other room trying to psyche the players to a better performance in the second half but John had only one thing on his mind, to ease the anger smouldering in him by scoring the only goal that mattered to him right then. The smell of sweat and liniment only encouraged the defender’s cock as he pushed the striker to his knees and told him to “open up”. John’s hips lunged forward and he sank his long thick throbbing dick down the blond God’s tight throat. He pumped wildly for a couple of minutes until he could feel the hot sensation begin to bubble through his body. A final few long stabs soon brought him to an oozing climax, filling deep within Billy’s belly. John sighed with relief and Billy moaned how much he needed that… his own cock was swimming around in his cum filled jock strap. Having now psyched each other up they couldn’t wait for the second half to begin.