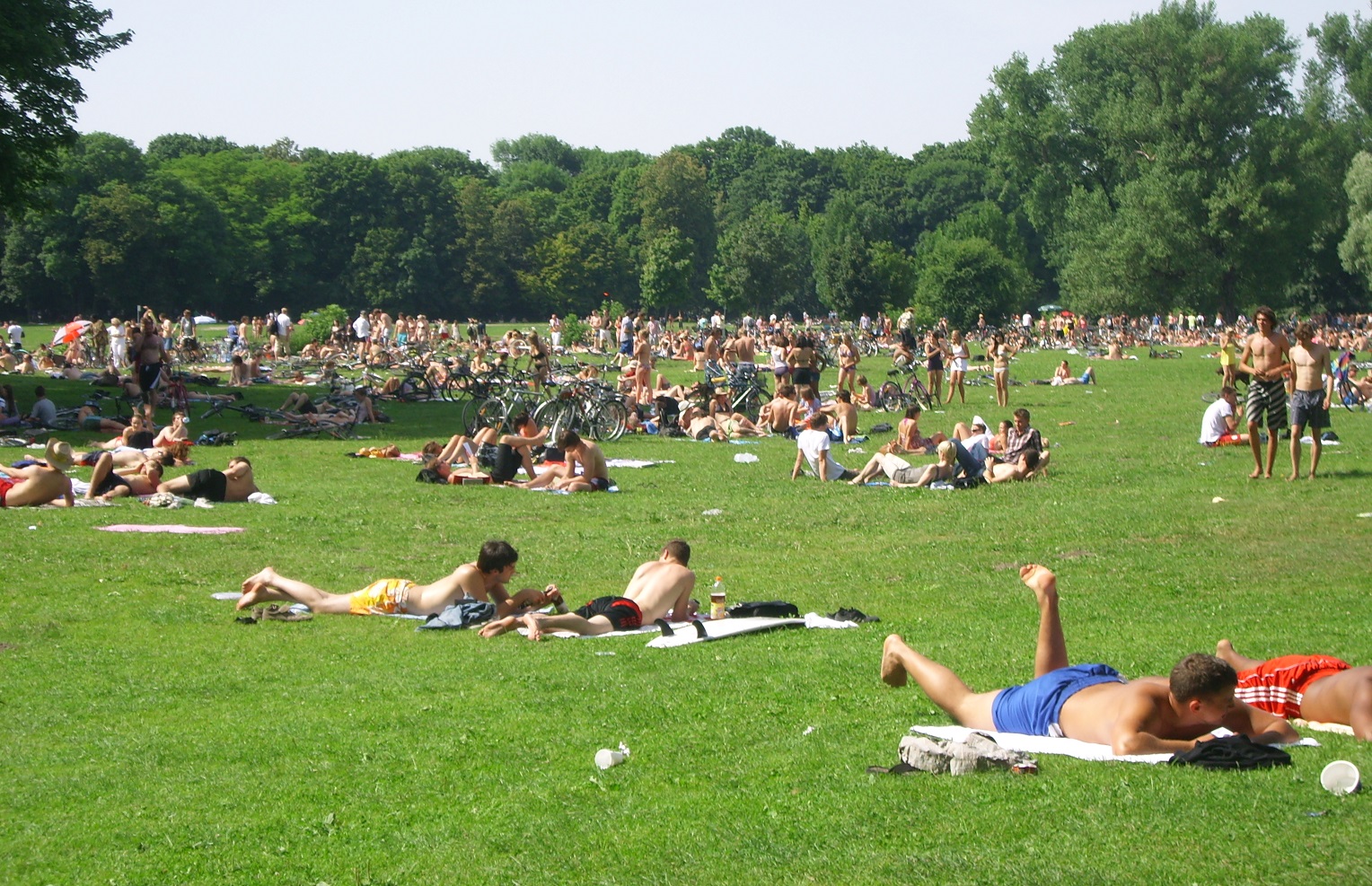 It was a hot, late September day and I was walking in the park. I’d just been ‘relieved’ of my position at the call centre (for telling a particularly annoying caller to go screw herself) and though I was glad to be rid of that hive they called an office, I was now without any work. Therefore, although I might have been elated to begin with, the truth of my circumstances soon dawned and I began to feel a bit vulnerable about my future employment prospects because the jobs market was at an all-time low. As there was nothing I could do about it at that moment, I decided to enjoy what could have been the last sunny day of summer, by taking in the enjoyable weather and having a relaxing sunbathe in the park.

It was fairly busy. Loads of people seemed to have thought the same and the grassy slopes were an array of people lying out, eating lunch, reading or chatting with friends. Set further back there were some trees where the numbers of sun-worshippers appeared less, I suppose the shade not helping with a late tan. However, as I searched for a bit of space I noticed one guy lying stretched out in the grass, with his head resting on a pile of rags and wearing nothing but a pair of Calvin Klein tightie-whities, except they weren’t that white. Don’t get me wrong – they weren’t filthy dirty and covered in piss stains and such. No, to my eye, they were obviously old and had been worn for quite some time and even though the crutch held a reasonably sized bulge, the actual leg holes were loose and a bit frayed. The man looked to be in his late 40s early 50s, receding grey/ginger hair on his head but a fair amount on the rest of his body. He was slim and to me seemed in pretty good nick for his age. I may be 21 but I know what I like and the overall package that this man presented was definitely worth taking another look. I settled down just a few feet away from him so I could watch him snoozing under the tree and, if I’m being honest, to see if I could catch a glimpse of the man’s cock up the leg of his underwear.

I’d been watching him dozing for a few minutes when he woke up; propped himself up on his elbows and just gazed at me with a quizzical look on his face. I didn’t need the sun because I felt myself turning beetroot red with embarrassment as I stared back at him.

“Hi.” Was all I could muster in way of conversation and even then, much to my shame, I immediately stared back at his crutch and saw a little ripple of movement under the cotton fabric. “Hi,” he replied, “… enjoying the… weather?” With the emphasis on ‘weather’, I knew that wasn’t actually what he was really asking. I felt a bit emboldened by the fact that he was talking to me so I carried on. “Yes, I’ve had such a crappy day… that the… er… weather… and the… erm… sights,” and I looked back briefly at his briefs, which again gave a little pulse, “have lifted my spirits a bit.” I paused for a moment before adding, “Thank you.” He smiled and we got into conversation. I told him about the job or lack of it now. My annoyance at stupid people who would phone up with the most ridiculous questions or complaints and how heartily sick I was of being nice to folk who didn’t deserve to own a phone. Yes, I’m afraid Tony (he had introduced himself by then) got all my simmering resentment and listened to me berate a world for no other reason than I was in a bad mood. He took it well; even occasionally saying something positive in my raging defence and making me feel good about me again.  The more he listened, the more I liked him. He seemed genuine and supportive and, more importantly, didn’t seem to worry that I spent most of my time raging against the world while looking at his crotch. His package had filled out the front of those CKs quite a bit since we’d started our conversation but his dick, much to my disappointment, had not shown itself down the leg hole.

Once I’d calmed down a little from my tirade he suggested that what I needed was a drink. I agreed but told him as money was going to be in short supply from now on I’d better pass. He shook his head and said that he’d get them if I wanted one and, at that moment, a cold beer was just what I needed. He stood up, and surprisingly, looked even better once erect, his briefs now hanging tightly onto his hips but still loose around the leg though the bulge was still impressively present. The bunch of rags he’d been resting his head on turned out to be a really tatty blue t-shirt and some very well worn, baggy camo shorts. He slipped them on quickly and the shorts hung on his hips exposing a good deal of his underwear waistband, which despite his age, made him look hot. I followed him as we walked for about 10 minutes. We’d passed a couple of pubs but I thought he might have a favourite that he wanted to go to. Shortly we arrived at a door between two shops, a betting office on one side and a baby’s clothes shop on the other, he unlocked it and I followed him inside, up a flight of stairs and into a very nice living room.

“Make yourself at home,” he said throwing his keys into a ceramic dish by the door, “I’ll get us a drink.” The room was not what I expected, not that I had expected to be taken to his home, but, on just meeting the scruffy man I would not  have thought his taste in furniture and art (yes artwork was all over the place) would be like this… it just didn’t seem to fit.

After the walk in the heat to his place I was sweating like the proverbial pig and when he returned with a cold bottle of Bud for me he was back to wearing just his underpants. “You look hot.” He left the word ‘hot’ hanging in that air for me to take whichever way I wanted and I noticed that the look in his eye was of more than just a passing interest. “Perhaps you’d feel more comfortable if you take off some of your clothes?” The question… slash… suggestion was just daring me for a response. So, as I removed my jacket, he said that as I’d been looking at him in his pants all day, maybe I should let him view mine. I loved his cheeky, flirty way and, as I hadn’t had sex for a good three months, and I assumed this was were all this was heading, I thought… why not… I felt I needed a bit of a diversion from worrying about work.

He didn’t disappoint. The wily old bugger had more than what his bulging briefs promised. He was inventive, powerful, eager, hard and enduring; he made sure that I didn’t leave less than well and truly satisfied… and full.