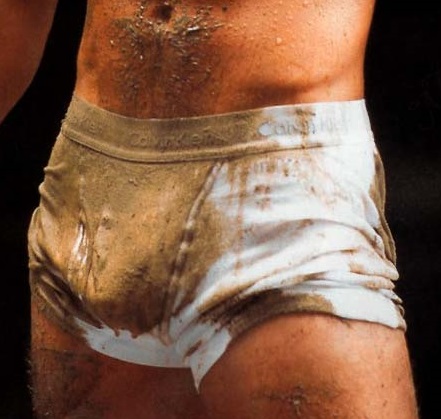 It was summer and the day had been wonderfully hot, one of the few as I remember.  I’d spent the entire day in t-shirt and shorts wandering the countryside near my home and a lot of that time was spent on various grassy knolls stripped to my undies, enjoying the heat. To me, there is little else finer than lying out, fondling oneself and being gently wafted by a warm breeze. As the day progressed the heat got more oppressive and the sweat turned my new briefs into a sponge. I could tell as the perfect clear blue sky began to accumulate the odd cloud and the atmosphere was getting heavier, we were heading for a downpour before the end of the day.

As day turned to evening, the clouds had become dark and menacing but still nothing had happened to dispel the humid and clammy feel of the oppressive weather. My mate Colin and I sat in the conservatory overlooking the back garden; windows and doors wide open in the hope of catching any passing breeze. We sweated in our shorts and t-shirts trying to keep cool with supplies of ice cool beer from the fridge. It was too hot to be frisky and even talking seemed quite an effort, when the first tell-tale splash bounced on the conservatory roof. This was followed immediately by a few other large spots making even bigger splashes on the glass roof. Five seconds later the heavens opened up and a great deluge just streamed from the sky. Almost at the same time a frightening white flash and horrendous crack of thunder announced that a storm had gathered over the house. It was scary and exhilarating, as flash after flash lit up the garden, complete with the noisy thunderous accompaniment. Colin suggested we strip off and stand in the rain to cool down.

We pulled off our t-shirts and shorts but before he could remove his underpants I pushed him outside into the downpour. In a matter of seconds, his “sensible” white cotton briefs became see-thru as the rain soaked in and revealed the dark of his pubic bush and outline of his cock in a semi erect state. He rushed to the centre of the garden with his arms outstretched as the rain beat down on him, his firm arse cheeks being emphasised behind the transparent cotton. He looked fantastic. I pulled off my shorts and stripped down to my briefs and thought, fuck the lightning, this looks like fun.

Colin and I stood side by side as the giant-sized, warm raindrops pummelled our bodies. The force of the rain didn’t seem to be easing and already a stream of excess water was flowing from the top of the garden, carrying leaves and soil down the slight incline into the now waterlogged flowerbed. As the thunder cracked around us we screamed in exhilaration and shouted out loud adding our vocal appreciating to the non-stop noise. We were having fun. When Colin’s back was turned I snapped at his waistband and he chased after me seeking some kind of revenge. Before long we were writhing on the wet grass tickling and rubbing each others bodies, stiff cocks trying to poke through the now saggy cotton material, telling each other how much we were enjoying the different sensations. Our lips locked in a passionate embrace and, as the heavy, beating pearls of water massaged our skin, we urgently rubbed our throbbing dicks together. I slipped sideways all the way down the incline on my arse and ended up in the muddy pool that used to be the flowerbed. The mucky water lapped around my groin, the heat from the ground had warmed it up and I was getting randy again from the surprisingly sensuous feel of my muddy situation. I called out to Colin to come and join me but he was already convulsed with laughter at my inelegant journey down the garden. When he saw that I was getting hard again he rushed past me into the house and insisted that I keep those “Puddle Pants” away from him.