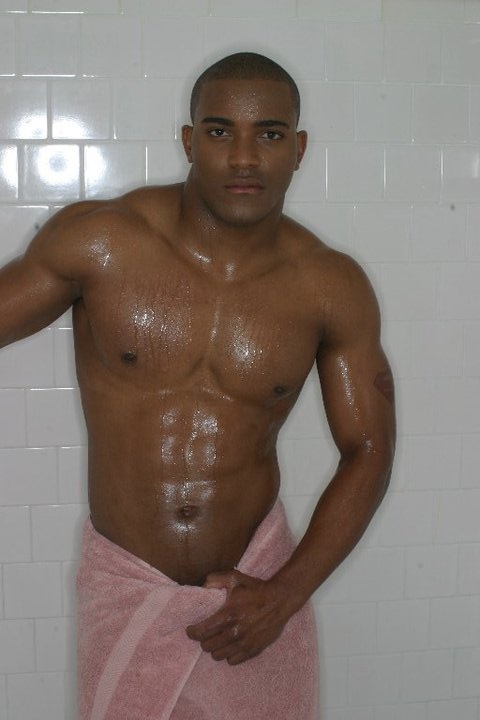 Josh was a constant tease. Fresh from the shower he always looked so damned hot. His fit body highlighted by the steam rising from his taut muscles, the towel around his hips clinging on as he stood to chat to another teammate. Once dried, his fantastic black smooth muscular body had me constantly in a state of horny expectation… and the bastard knew it. He walked around the changing room after training wearing nothing but a white jockstrap, which needless to say only emphasized his terrific butt. Those fabulous black globes gleaming and steaming after the shower and I just wanted to press my lips between them, kiss deeply and get my tongue up into his hot pink knot of a hole.

We’d been at the same club for about 6 months and we’d clicked straight away. He was happy to meet up with a fellow northerner in a team that boasted only four Englishmen, the rest being highly paid (and very skillful) imports from all across the globe. Football was the trading standard these days and the money was astronomical but Josh, like me, wasn’t flash. We enjoyed the money but hardly ever flaunted it; Josh being a happily married man, with two kids and another on the way, me being a closet gay lad that was trying desperately not to draw attention to himself. However, since Josh had been at the club there had certainly been vibes between us and we did spend a lot of time in each others company. Our team mates thought it was because we were from the same region of the UK and although that was part of it… it wasn’t the whole story.

The cotton bulge at the front of his jock was equally mind-blowing, I’d seen him naked many times so I knew what was hidden behind that bump but the cotton shield seemed to tease me more. Enough was enough, so once my team mates had left the locker room, I pushed Josh into the shower area (the only bit that was even semi-private) dropped to my knees and eagerly pressed my lips to that cotton pouch. I wasn’t sure what the reaction would be but, if I’d read the signs correctly, this wouldn’t be too much of a surprise to Josh. Immediately he was as hard as I was and soon enjoying the sexy feeling only a true friend’s mouth can give. His dick pulsed heavily behind the sweetly sexy, freshly laundered cotton, stretching the fabric and leaking pre-cum. I could tell the care his wife had taken with the washing, she always added conditioner to the cottons and his crotch smelled heavenly. However, as soon as he started leaking that sexy pungent smell it was all Josh… a unique aroma that still drives me wild.

He grabbed the sides of my head and forced the entire length of his thick meaty dick to the back of my throat. As I gagged and tried to catch my breath he eased it further in delving deeper into my belly. “What took you so long?” his smiling face looked down at me. I knew it… he knew it… and now my throat knew it… that the thick forceful cock of his loved a bit of attention from another guy. The signs of that ‘connection’, which was more than team mates, had been there for ages. So, I had to ask myself, why had I waited so long?

He seemed to know that I’d lusted after this moment for such a long time and now he was more than happy to give me what I wanted. By a mutual, unspoken feeling we knew that from that moment on things would be different, but better, between the two of us. Jesus, he rode me hard on that first occasion filling my belly twice before he flipped me against the shower wall and sank his dick up my tight hole. I braced myself for what I hoped would be the best fuck of my life and he didn’t disappoint. Once it did happen… it all happened so quickly. I don’t mean the sex, although that was a grabbed quickie… if shagging three times can be described as a quickie. No, one minute we were just team mates… the next I was his cock whore. He loved that first time as much as I did. Getting his rocks off with another willing guy and I hoped it wasn’t going to be a one off. I wished we were lovers but, he has his wife and family and I wouldn’t want to do anything to upset that. We’re as close now as we ever were and on away matches we always room together and after training… he often comes back to my place before going home. He loves to fuck my throat, enjoying the spasming muscles contracting around his thick prong. Occasionally, he’ll ride my arse for a couple of hours, taking a great deal of pleasure in filling my butt with his copious amounts of cum. He seems to know instinctively what turns me on so his hands never stop moving, tweaking, rubbing or stroking and he says he loves to hear me moan in pleasure. However, he gets the biggest kick from my screams of absolute joy as he builds to that rampant and furious climax when we both spurt our loads in unison.