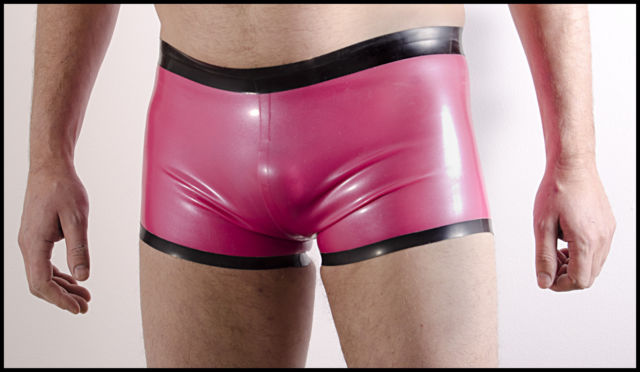 Simon sat at his laptop naked apart from a pair of white BVD cotton briefs, and clicked on the download button. The computer was his only friend as it contained access to all the things he thought he needed. As he sat his right hand automatically rubbed his cock through the soft material as he absentmindedly clicked the mouse over his email and began to read what had come in overnight. Thankfully, the usual load of spam offering pills and potions to make his cock bigger had already been siphoned off to the waste basket and he was left with only real messages.

However, he was intrigued and clicked on the reply.

There was an instant automated answer that read that his interest was noted, the organisers would be in touch and that he should make ‘preparations’ for something ‘quite extraordinary’, also, a ‘Do not reply to this email’ note ran along the bottom of the screen with a timer counting down. He glanced at it and saw that in 2 days, 14 hours, 22 minutes and 21, 20, 19… seconds, something was going to happen. He didn’t know why but he suddenly realised he’d been rubbing his crotch quite vigorously since he opened the message. His cock was hard and leaking its pre-fluid through his cotton underwear. “Christ,” he thought, “if this is how the message affects me…”  He left the rest of this thought in his head as he sat back in his leather computer chair, eased down his BVD’s and took a firm hold of his warm silky dick.

Every time Simon logged onto his computer, the countdown clock was there, reminding him, coaxing him, inviting him to do… WHAT? He was getting a bit infuriated that after 24 hours he still hadn’t received any further info on what to expect or what was expected of him but, each time he viewed that silent but all intoxicating clock, his dick hardened and his briefs received another coating of his baby making juice. That was seven times since he’d received the email and his cock was getting more and more raw. Each wank had been longer, the sensations more intense, the pleasure immeasurable. For some reason he wasn’t too sure off he’d taken to wearing different underwear whenever he parked himself in front of the screen. Even his taste in the style and fabric of his undies seemed to spur him on and take him to a previously undiscovered area of sensuality… well, that’s what he thought was happening. Which was strange, after all, it was underwear he wore regularly but now…? Well. He couldn’t explain it but it felt… different… sexier… more influential… more…

12 hours 03 minutes and 14, 13, 12 seconds, Simon was again faced by the inevitability of time running out. He tried to get on with some work waiting on the computer to be finished but the clock kept demanding his attention. Even the folders full of unwatched porn sat unopened on his desktop as one hand clicked away the unwanted email, while the other rubbed at his now silky boxers covered cock. As the clock hit 12 hours dead a ‘You’ve Got Mail’ icon dinged and the clock changed colour from white to pink. For some strange reason this short series of events had an effect and he shot a load into his shiny shorts. He clicked the icon and the message revealed a tiny bit more information. It said a number: 14,237, which changed to 14,238 while he was looking at it. Oddly enough, it moved from the message page and took up space in a small box next to the pink countdown. His dick involuntarily pulsed and another great spurt further messed his shorts. He sat transfixed in his gooey pants as the countdown clock made its way to the 11th-hour and the numbers panel had increased by nine.

Simon knew something exciting would happen when the clock hit zero… he also had an inkling that the gradually increasing numbers perhaps meant the amount of people who were going to take part. He knew when, he just didn’t know where. As he had a few hours to kill he went shopping and although his cupboards were empty of food, eating wasn’t on his mind as he bypassed the Tesco Express store and swept into the High Street sex shop. He searched through the display of colourful and sexy branded briefs. He knew he wanted something special, something different for him, something incredibly sexual as well as sensual so, took his time fingering along the rows of black leather shorts and accessories, eventually finding the very item that he wanted to take home. With over an hour to go Simon was in place in front of the screen still unable to do more than watch as the pink clock, which was going a deeper shade of red, flicking down towards zero. The numbers panel now read 26,189 and Simon’s head filled with the thought that those numbers represented people. What were they all like? Were they all like him? Had this whole process affected them as it had done him? Naked, apart from a pair of red, high-gloss, rubber briefs, with a built in 6” dildo… his hard dick making the tightly stretched fabric super erotic… he couldn’t wait for that final few seconds. His mind was filled with the thousands of other guys, waiting at their screens, rubbing their cocks, massaging their balls, tweaking their tits (yes this was another thing that he had surprising found out he loved since that countdown had begun) he wondered what else would they all be up to? Would they all have found a new ‘vice’ to enjoy? Might they all be sat in rubber briefs? What strange and exotic clothing, if any, would they be wearing  at this very moment as they sat glued to their computers? His cock was hard and demanding as his thoughts contemplated how kinky the ‘others’ may be feeling and that drove him nearer to eruption.

His head swam at the varying possibilities. He wished he could see them all, or at least a few of them, he had turned on his webcam just in case. With five minutes left, the two sets of numbers took up centre screen – large, beckoning, demanding to be watched. Over thirty three thousand… and increasing… appeared on the left hand side of the screen as the final numbers disappeared from the clock on the right hand side. Sexy words and images flashed across the screen, whilst strange thrilling sounds erupted from the speakers as the moment approached. Simon pushed himself further back into his chair, the embedded dildo pushed deeper up his slick bum hole and nudged against his prostate. He wriggled in his seat setting up wave after wave of sensations stimulating his entire body, while his fingers rippled along the thick and sexy outline of his rubber encased dick. With just seconds to spare, and the onscreen images getting more and more sexually intense, he pulled himself free from the tight rubber confines, aimed his cock at the screen and whooped with excitement as with the final second he could hold back no longer.

Around the world, at that precise second, 33, 784 people viewing their computers joined in a mass ejaculation. For some it happened without any touching, while for others, they couldn’t keep their hands from joining in that final, ultimate thrilling response.  Spunk had hit screens with forceful intensity, which had left those who had taken part completely, but deliriously, spent. No one knew who to thank, no one knew whose idea it was but all were sure that it was a brilliant and satisfying event. As they came down from their super-high they had found out a little bit more about themselves and had, in some way, finally made a connection with other people.                                  Image: http://www.ebay.co.uk/usr/rubberalert