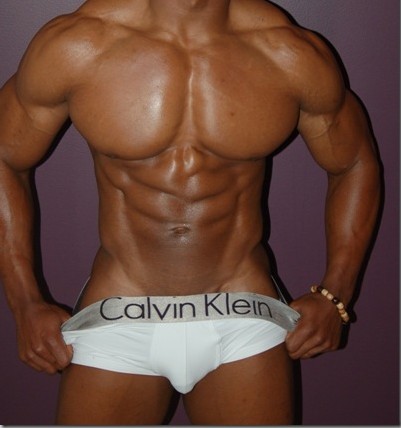 I knocked on the door, already with the little card I often have to leave, which lets them know I’d called but couldn’t gain admittance, but the door was opened almost immediately. “Bloody hell” I thought as I waved my id tag and took in the vision before me.  He nodded and led me to a small cupboard at ground-level in the hallway. Easy access but I was nervously fumbling with my instrument that read the figures automatically. He was stunning and I guess my mind just wasn’t on the job in hand.

His huge black body was muscular and seemed to gleam close-up. He was wearing a tiny pair of tighty-whities and I could see a very nice outline pushing against the revealing cotton fabric.

He saw me looking and said, “I always wake up with a hard-on.”

“With your body,” I fawned, and not realizing that it was 7 in the evening, “I bet you don’t often wake up alone.”

He flexed his muscles and posed as a strongman for a second. “You like it?”

“Sure,” I enthused, “and I bet it takes quite a bit of work to keep it like that.”

“I was talking about my cock,” he smiled.

“So was I” I quickly lied, it seemed like a good response.

His bulge had grown considerably since I’d entered his home and whilst I was on my knees in the cupboard reading his meter he tugged down the front of those tight cotton knickers and out sprang his goliath of a throbbing cock. “You’d better take a reading on this… I’m in urgent need to plug something!”

In my three years of doing this job I’d dreamt of this happening hundreds of times but, up until that moment, my dreams had been in vain. Now, with enough meat to satisfy me for another three years being waved enticingly in front of me, I knew I wasn’t going to resist.

He saw my immediate acquiescence and moved in closer so his hips were just an inch away from my face. I took in the aroma of sweat and spunk that his cotton pants held whilst desperately wondering how I was going to cope with his huge dick. Having agreed to what was about to happen I suddenly realized there was more to such an act than appeared in my fantasies. I knew I’d just have to cope as best I could and let him take the lead.

Slowly and methodically he introducing its length and girth to my not very experienced cock-sucking mouth… I don’t think I’d ever been that stretched.  He let me slurp on it for a while but my constant gagging I assumed, didn’t exactly make it an unbelievable experience for him. His hands were not just guiding my lips because once I’d got the hang of things he started feeling inside my shirt and tweaking my tits. My shirt was loosened and as he gently thrust inside my stretched cavern he made some very nice comments about how sweet and gentle I was. However, no matter how professional I thought I was at sex I was nothing but an incompetent amateur compared to him. My mouth was aching but he stuck at it until he was on the verge of coming then he pulled out, turned me over, yanked down my work pants, and while I was still on all fours on the hallway floor, mounted my tight, virgin backside.

Lubed by his gob full of spit my butt was quickly made ready and I didn’t really get chance to think of what was about to happen… it just did. His dick was rigid and wet with my saliva as he forced it in and I yelped under the force and the undeniable fact that he was going into areas that had never had such an experience before. I stifled my scream of surprise and agony as I realized it wasn’t just my mouth that was being stretched to capacity, only for that feeling to be quickly replaced with one of absolute euphoria. As he slipped on all the way up and banged away I tried to steady myself to prevent from falling over. Then his cock hit a spot somewhere deep inside that sent a charge through my body, my cock reared up, and I spewed a good weeks worth of spunk all over that hallway floor.  Even though my knees were hurting, almost as much as my butt hole, I came again before, sweating and thrusting like he was trying for some kind of Olympic record, he finally unloaded deep inside my burning butthole.

After a few minutes of recuperation he asked me if I had everything. Pulling up my pants and checking my meter reader I said I had, so, he opened the door and wished me well. “OK, “ I said, as I rearranged my underwear and buttoned up my shirt and I was out the door as quickly as I’d entered it. As the door closed on my hunk I muttered a weak “Thank you” and hobbled to the lift in a sort of sexual afterglow that I’d only read about in the past between the pages of some rather bad erotic fiction.