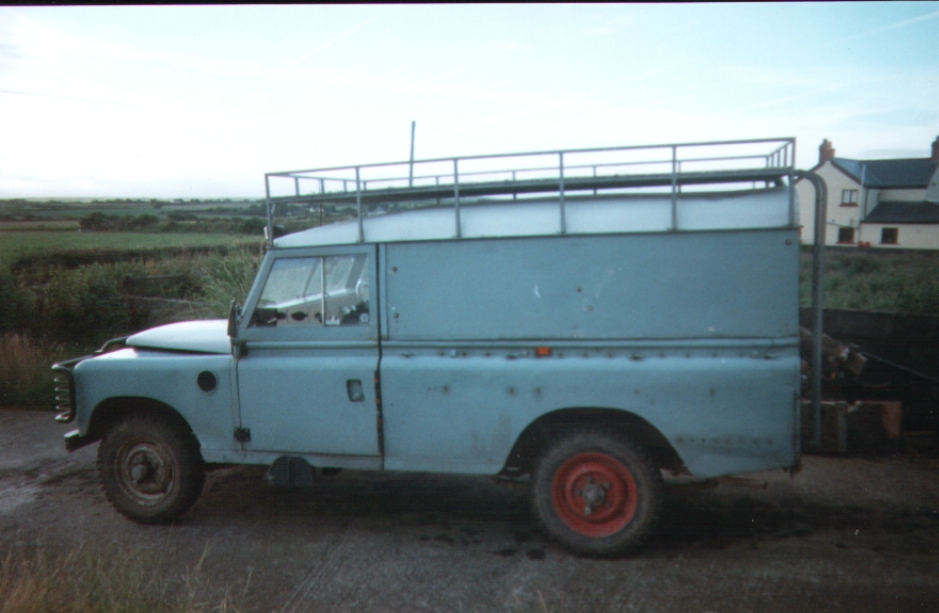 I met Jack through a mutual friend, Bill.

Bill and I had been corresponding with each other for a couple of years after I’d replied to an advert of his in one a gay publications. Unfortunately, we lived at the opposite ends of the country, so had only been able to swap stories and photos of each other. We had never actually met. Meanwhile, Jack had responded to another advert of Bill’s in a contact magazine and they had been able to meet and have a session together. As it turned out, Bill realised that Jack actually only lived about ten miles away from where I lived and, after showing him a photo of me, suggested he got in touch.

We eventually decided to meet in a lay-by on a road that both of us knew. He told me he’d be in a long wheel-based Land Rover and not to be late. It was a dark early winter’s evening when I arrived and spotted his vehicle immediately but as I walked up to it I was more than a little apprehensive. As I climbed into the cab he took one look at me and said “I’m going to have fun with you.” Then he slammed into gear and we took off leaving my car to be picked up later.  He didn’t drive far, just off the main road and down a bit of a country lane. We parked on some spare ground at the side of the road and he ordered me into the rear of the Land Rover. It was dark and cold in the back as it was all bare metal on the floor and up the sides. We sat on the wheel arches on opposite sides just getting used to the sight of each other in the dark. I have to say he looked a horny but mean bugger. He was a mechanic and he’d obviously arrived straight from work. His hands were big and grimy and I could see part of one of his tattoos where his oily boiler suit was undone. He wore big black work boots and seemed oblivious to the cold. Despite the freezing temperature he instructed me to remove my jacket and as I struggled in the confines of the Land Rover he moved over to sit beside me and started twisting my nipples hard through my sweatshirt. I let out a little cry, which brought a slight smile to his face as his hands explored further. He had my belt undone, my buttons pulled open and his hand pawing at my underpants in seconds. My dick reacted to a reflex of its own and stayed small and frightened behind its cotton shield.

Jack took control and it wasn’t long before my sweatshirt was pulled over my head and tossed into a corner, shortly followed by my trainers and jeans. He was biting my now sore tits as his hands grabbed, nipped and explored the rest of me. He got fed up with trying to coax my cock into some kind of life but his probing fingers found my tight arsehole. As a finger fiercely fought its way into my eventually yielding butt he ripped open the rest of his coverall to reveal not only his hirsute body but also his statuesque pulsating knob.

His finger unceremoniously pulled free of my arse and he forced my mouth to make friends with his greasy cock.  It was no time for niceties and his dick was plunging down my throat in moments. After a couple of gagging minutes of this he pulled out and turned me to face the side of the van. I was freezing.  All I had on was my cotton briefs and my knees hurt against the cold metal floor. I was also a bit worried that at any moment we would be discovered. Although we were on a country lane, several cars had passed by and their headlights had illuminated us as we had embarked on this surreptitious sexual encounter. Still, it didn’t seem to bother him at all as I heard him spit into his palm and slick it into his cock. His hands grabbed either side of my undies and, in one swift movement, he just ripped them apart. My bare arsehole was quickly occupied by a spit covered probing finger, then two, then an attempt at three.  I couldn’t stand the discomfort, not only of his fingers but my aching knees on the bare metal floor and the freezing conditions. Again I tried to pull away. He grabbed me by the hips and as he forcefully dragged me back into position he thrust his rock hard cock up into my innards. His knees went between my thighs and pushed them apart enabling him easier access as he vigorously drove his dick deeper. I squealed in protest but he was having none of it. Once in he quickly built up speed and his energetic thrusting soon had the Land Rover rocking and my arse on fire. I wasn’t sure I was enjoying it but, I’d made the decision to meet so I wanted to go through with it. Hell, he felt enormous so when he started this initial assault, my sleepy little cock rose and responded in seconds as it gushed a creamy load into the front of what was left of my pants. I screamed that I’d cum but he carried on pumping away as if he was drilling for oil. Each time my guts met his invading cock he seemed to be trying to force it out of my mouth. I turned my head to look at him and in the lights of a passing car I could see the intense concentration on his face and beads of sweat forming on his forehead. With the ferociousness of the action the back of the vehicle was bouncing around as if buffeted by a hurricane and this fucking piston engine was banging my head against the van’s side.

About ten minutes later he unloaded whatever he had bubbling away in his balls deep inside of me. Forcing us together against the side of the van I could feel the pulsation of his cock as it shot up into my guts. He held me there as he slowly pumped himself empty.

Eventually he pulled out and I painfully turned to face him.  “I think we both needed that, I know I fucking well did,” he laughed and sat back on the opposite wheel arch as he had at the beginning… only this time his dick hung limply through the fly of his filthy coverall. Despite the cold he was sweating heavily and suddenly started to talk about Bill. I was adding the odd comment here and there but was really sore and cold so began to look around for my clothes. My white briefs were in tatters with a big damp patch down the front and oily finger marks all over them. I pulled on my sweatshirt to keep warm as Jack began to tell me about the kinky session he and Bill had managed to have recently. As he told me about the ropes and the dildos I could see his cock begin to grow again. In a matter of seconds it was back to its frightening size and I thought it might be just the right time to find my jeans and draw the event to a close.

He began to say how highly Bill had talked about me and how he thought we’d get on well together. I suppose it was quite flattering to hear nice things being said about yourself, especially sexy and ego building things. All the time I could see his cock vibrate as more blood rushed along its thick and veiny shaft. He pulled me to the floor and before I had chance to say anything my legs were forced over my head and his throbbing cock was resting at my arsehole. He said he wanted to watch my face as his dick made its way once again into my belly and he enthused about how “fucking great” it was to see his massive tool disappear up my “fucking tight channel”. I hope he enjoyed the sight as he pushed his mammoth, arse splitting, eager cock once again into my bashed and abused channel. This time he only took about five minutes as he slow-dicked me to reach his orgasm. As he came he grabbed my ridged dick and wanked me furiously through the filthy cotton.  It only took a few seconds before I was left with even wetter pants.

When he had finished he tucked his cock away and fastened up his coverall. As I pulled on my jeans, he climbed into the driver’s seat and set off. By the time I was dressed we were back at the lay-by and he said that he’d phone me soon to fix another date as he’d had a “fucking ace time”. Unfortunately he couldn’t stop now as he was in a rush to get home to his wife and three kids or they’d wonder where he was.

I stood there at the side of the road sort of shell-shocked in my sodden pants, my crotch suddenly getting cold in the night air and my arse feeling that it had been assaulted by the entire England Rugby team.  As he drove off I thought that would be the last I saw of him… but it wasn’t!