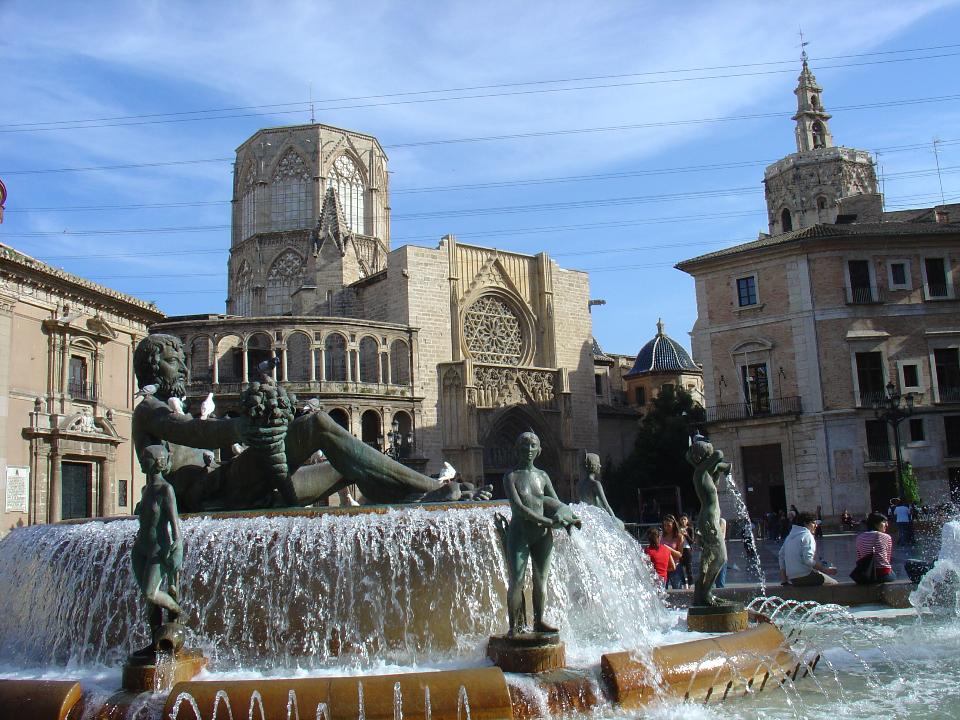 I had been to Spain on vacation many times but until recently I had never been to Valencia. There can be few cities that have moved with the times so impressively and yet maintained a fierce hold on their historic legacy. Here can be found ancient city walls and gateways nestling alongside some of the most futuristic architecture you will encounter anywhere in Europe.

Founded by the Romans in 138 B.C. the seaport rapidly grew into one of the main trading centres of the Mediterranean. Over the years a host of conquering empires have added to the city’s wealth, importance and design, while leaving their own stamp on the people and surrounding area. Romans, Arabs, Visigoths and the crusading knights have all left something of their culture and influence as can be found in everything from recipes to the irrigation system and from art to religion. The old quarter is home to the Plaza de la Virgen and the Cathedral, which dominates the centre of the city. In the main square of Plaza de la Reina, I recommend you jump on an open-topped site-seeing bus (www.valenciabusturistic.com) to get your bearings and a perspective on this wonderful city. The tour has commentary so you can learn about all the points of interest quickly and fairly comprehensively. Having said that, there is nothing better than just wandering the streets and finding your own little historic work of art. A great way for tourists to save a few Euros during their travels, the Valencia Tourist Card (www.valenciatouristcard.com) is a combined card offering free public transport (city bus, metro) and tons of discounts. Depending on your personal itinerary, you can buy a Valencia Tourist Card for one, two, or three days, a purchase that will gain you free/reduced admission to museums as well as knocked-down rates on anything from restaurant bills and bar tabs to bike tours, spas and internet cafés. Establishments offering discounts for Valencia Tourist Card buyers are indicated with a sticker, so you’ll always know where to use it! Although the city is renowned for its paella (amongst other dishes) the most fun I had while eating out was at the many ‘pinchos’ bars that are all over the place. They are related to tapas but are individual portions of food on bread held together with a toothpick. You just help yourself… the size of the toothpick tells you what price it is, so you can choose what you like and have as many as you like. At the end, the waiter tots up the number of toothpicks and charges you accordingly. In 1957 the river Turia, that once meandered through the city, was diverted after a particular devastating flood, leaving the riverbed prime for redevelopment. It became an impressive 10 kilometers long park where the citizens of Valencia happily stroll through the impressive gardens if they wish to relax. However, it is also the area where the more active can jog or cycle along the many interweaving pathways. There are also many sports facilities for the hard-core sports fan including; a running track, a baseball field, rugby and football fields, a dirt-bike area, two roller-skating areas, a skateboarding zone and a giant chess board.

Meanwhile, as you walk through the park towards the coast you come across what can only be described as a vision of avant-garde and modern buildings that look like they have been designed for the set of some high budget sci-fi movie.

Designed by Valencia-born architect Santiago Calatrava, the huge and impressive structures announce that you have arrived at Europe’s biggest cultural-leisure complex. Here you can interact with science in the Príncipe Felipe Science Museum,  feel the action in the Hemisfèric, submerse yourself in the Oceanogràfic, or admire the Palau de les Arts Reina Sofía. However, if this sounds like just too much culture and fun, and all you really want to do is lie on a beach and sun yourself, then you are also in luck. The Malvarrosa beach or “Playa de Levante” is easily reachable from the city centre by metro, bus and car as well as on foot and by bicycle using the cycle path. The wonderful fine sand is all you would expect from a Mediterranean coastline and there are several beaches to choose from.
Meanwhile, if you prefer, there are a couple of gay beaches:  Playa El Saler – The specific area is the beach between the “lago artificial” and the “Casal d’esplai” & Playa Pinedo – very close to the city in front of the Casa Negra. The port area is busy with commerce and cruise liners, while the Royal Marina had a revamp when it recently hosted the yachting world’s premier event, the America’s Cup. While in 2011, the seafront also became part of the Formula1 circuit as the likes of Lewis Hamilton, Kimi Raikkonen and Fernando Alonso powered around the winding street track. The marina is a great place to look around and has some high-class shops and pretty impressive restaurants. Further along the coast is the Albufera Natural Park, which is home to the largest lake in Spain and one of the most important wetland areas in the Iberian Peninsula. It is a place of great ecological interest with rare species of wading birds and a rich variety of wildlife.

There is an abundance of things to do in Valencia but if you want to spend your late evenings in a gay atmosphere you could try: I would suggest you check out https://mag.bent.com/dating-senior-citizens/a to get all the latest info on what’s hot and what’s not.
dating app for kinks
en.comunitatvalenciana.com/town/valencia-2