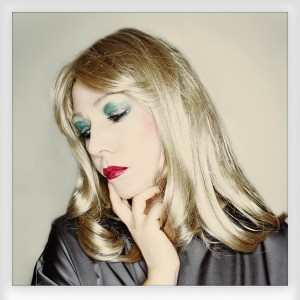 Billie Ray Martin, best known for her work in Electribe 101 and her smasheroo  hit ‘Your loving Arms’  is about to release her new project from the new Electronic Duo ‘The Opiates’.  The album called “Hollywood under the Knife’ is scheduled for release in October and each song is about another tortured Diva, Hollywood actress, failed Star… in search of identity, gender and a life beyond isolation.  The first video from this album is a song about Warhol star and Transvestite Candy Darling, in which BRM dresses as Candy.

The Artwork for the entire album was done by gay icon and Turner Prize winning artist Wolfgang Tillmans, who opened his entire archive to The Opiates and gave 10 unreleased images

The album comes out on the 17th October