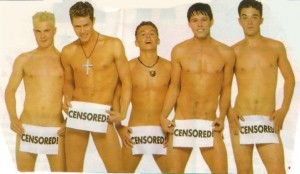 Boy bands.  The combination of youth, hot guys, dance moves, hot guys, floppy hair, hot guys and soppy love songs is possibly the greatest invention since someone came up with the idea of cutting bread into much smaller and more manageable sections, and selling it in a plastic bag.  Pre-packaged, moulded into recognisable shapes and filled out with an adequate number of good-looking members, boy bands brighten up even the dullest of moments.  Unlike lame ex-boyfriends the lads in a boy band manage to stylishly back flip their way into a guy’s heart and yet even when harping on about love, never wear out their welcome.  In fact what kind of world would it be if the likes of JLS, East 17, Backstreet Boys or N*Sync didn’t exist?  Clearly it would be a dreadful place, devoid of excellent choreography, colour coordinated clothes and washboard abs, and doesn’t even bear contemplating.  These guys, who have selflessly given up their time in the pursuit of creating everlasting happiness, should be given constant recognition for services to entertainment and not just fobbed off with an old Smash Hits award.  No, no matter what, the world and possibly even the universe need boy bands, and here’s why.

Rewind back to a more carefree time, when it was acceptable to watch children’s television on a Saturday morning, and memories will be stirred of seeing O-Town, A1, Five or BBMak prancing around on a brightly lit stage between cookery segments and episodes of Pokemon.  Do you think these guys were happy to be slotted in between the latest recipe for Rice Krispies cakes and a cartoon that made little sense to anyone above the age of ten?  No of course not, but they were there, week in, week out, giving every ounce of their vocal range and clutching microphones as though their lives depended on it.  Yes, even those members who were never given any of the good lyrics, still turned up and moved perfectly in time, reached out their hands and winked during all the correct moments.  They didn’t let down their fans because they’d got wasted the night before or called in sick with Man Flu, the deadliest form of illness known to man.  These guys were a constant force for good, and had more moves under their belts than a crack commando team put together by Hong Kong Phooey.

Even when the heavy hitters, like Take That or Westlife lost a member once they passed the bands life expectancy, it didn’t stop the rest of them from belting out their tunes and rising up from stools during the key change in a song.  These guys were professionals, and still are, even after escaping that awkward faze where technically they become too old to be regarded as boys.  This doesn’t stop them, and even if One True Voice, Bros or Phixx have faded out of existence, there will always be another band waiting in the wings to pick up the torch, especially if they happen to be related. Boy bands will forever have a place in not only the music hall of fame, but also the very fabric of time and space, one which even the Doctor couldn’t erase with a carefully crafted flick of his sonic screwdriver.  Like the fabled Hydra, cut off one head and two more will take its place, as though if this didn’t happen Earth would just somehow simply fall off its axis.  They’re perfect, they’re uniform, they cover all the bases and they’re often symmetrically placed.  Girl groups have too many girls in them, vocal harmony groups don’t have a cute yet quiet member who never seems to age, and so-called real bands don’t look very appealing splashed across a copy of Top of the Pops magazine.  No, boy bands have it all, relighting fires, getting hearts beating again and always being prepared to swear by the moon and the stars in the sky.  They hold a very special place in everyone’s hearts, yes even the hearts of heterosexual men, because they never stop trying, they never give in and they never feel uncomfortable when asked to cover someone else’s song.  If ever there was a time when boy bands were no longer needed, then something sinister will have taken place, but for now rest in the knowledge they have made their mark.  Or their Gary.  Or Jason.  Or Howard.