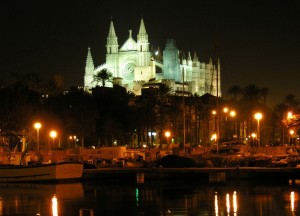 It bore the likes of Rafael Nadal – so it won’t bore you! Largest of the Balearic islands – those Spanish gems set in the Med – Mallorca has a diamond shape, the north east- and south west-facing sides of which support large bays, the former vast and sandy, the latter dominated by capital Palma; the north west-facing side, being ridged by the Serra de Tramuntana range soaring to 1450 m; the south east side dotted with secluded Menorcan-style coves. Romans conquered indigenous settlers, only to themselves be ousted by Moors, trailed by Christians and Spaniards, then the mass-market package holiday brigade plus, increasingly, discerning queers, after year-round sun but a more local, authentic scene than the in-your-face global gathering on nearby Ibiza.

Mallorcan gay life if pretty much all centred around capital, Palma – mainly in its Gomila district, about 20 minutes’ walk from the Cathedral, in the shadow of the Castle, on/around Avenida Joan Miró, including…